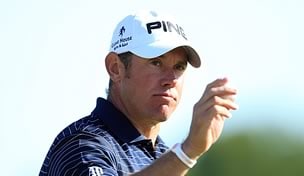 Lee Westwood is playing in this week’s AT&T Pebble Beach National Pro-Am for the first time in eight years, and for the occasion he has brought along a special guest: his father.

For three days on the Monterey Peninsula the 39-year-old Englishman will play alongside his father, John, in the pro-am portion. Vijay Singh, who is expected to tee it up amidst a banned-substance controversy, is the other pro in the group.

This is the second time the Westwoods have played together in a tournament. The first was the 2000 Dimension Data Pro-Am in South Africa. And Westwood won that week.

“He’s had a massive influence on me,” he said Wednesday of his father. “He’s the reason, really, I’ve got so good at the game. He and my mum invested a lot of time in me when I was growing up.”

The older Westwood didn’t play golf until Lee picked up the game as a 12-year-old. Seven years later, Westwood turned pro and hit the tour. His father, however, remained a 12 handicap.

“He went to every lesson that I have had, drove me there and sat there and listened to him,” he said. “I just got a bit better than him. Must be down to talent or something like that.”

Get ready to see more of Westwood in the States, which is welcome news for golf fans everywhere. In December, he moved with his family to Palm Beach County, and already he is enjoying all that Florida has to offer.

“Not having to look out the window and just throw on a pair of shorts and a T-shirt and go is almost too easy,” said Westwood, from Worksop, England. “Feels weird not having to get wrapped up and push the ice off the green.”

The only starts overseas that Westwood figures to make are the BMW PGA Championship, the French Open and the Open Championship.