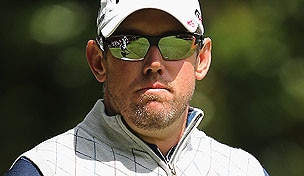 Lee Westwood moved into position Saturday at the BMW PGA Championship to win the European Tour’s flagship event for the first time in his career.

With a 5-under-par 67, Westwood enters the final round one shot behind Alejandro Canizares (68), who closed the third round with birdies at the 17th and 18th holes at the Wentworth Club in Surrey, England.

Canizares, a 29-year-old Spaniard, separated himself from Westwood moving to 9-under 207 after sticking his approach to 2 feet at the 18th hole.

Italy’s Matteo Manassero (69), who turned 20 last month, is two shots off the lead in a tie for third with Scotland’s Marc Warren (70).

Sergio Garcia, under siege over the “fried chicken” comment he made about Tiger Woods earlier in the week, shot 68 Saturday and is tied for sixth, just four off the lead.

Canizares and Westwood will be in the final pairing together Sunday. Westwood is playing in his native England for the first time since he moved his family to Florida late last year. Westwood is the crowd favorite this weekend.

“The crowd has been amazing,” Westwood told Golf Channel after his round. “Today was probably one of the best receptions from a crowd all the way around a golf course that I’ve ever had.”

Canizares won in just his third start on the European Tour, claiming the Russian Open in 2006. He hasn’t won since and has not finished better than a tie for 32nd in European Tour events this year.

Canizares is contending despite being diagnosed with viral meningitis two weeks ago while at the Volvo China Open. He spent a night in the hospital there.

“It was pretty scary, but I didn't know there was two types [of meningitis],” Canizares said on Friday. “There's viral and bacterial. The bacterial one is the really serious one, so luckily I had the other one. So it was a week off of fever and it was fine, but I’m not 100 per cent. I get headaches now and then. I get dizzy on the golf course when I stand up too quickly, like normal, but more than normal, and I'm not very strong enough either.”

Westwood, who turned 40 last month, is seeking his 23rd European Tour title and his first BMW Championship title in 20 tries. Notably, Westwood is No. 12 in the Official World Golf Ranking, Canizares is No. 282 in the world.