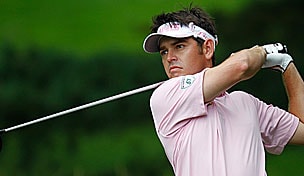 Getty Images
CHARLOTTE, NC - APRIL 30: Padraig Harrington of Ireland pulls a club as his caddie Ronan Flood looks on during the first round of the Quail Hollow Championship at the Quail Hollow Club on April 30, 2009 in Charlotte, North Carolina. (Photo by Scott Halleran/Getty Images)  -

DURBAN, South Africa – Louis Oosthuizen made a long birdie putt at the final green to take a one-shot lead after the second round of the Volvo Champions – and swapped a car for an excavator to use on his South African farm.

Oosthuizen had an 8-under 64 Friday on a rain-softened Durban Country Club course for a 12-under 132 total, one shot ahead of Scotland's Scott Jamieson (64) and Thailand's Thongchai Jaidee (68).

By sinking the last putt, Oosthuizen's team won a pro-am event that awarded a car to the winners. However, the farming enthusiast talked to organizers and swapped the car for an excavator, which happened to be the prize for anyone who made a hole-in-one at the 15th.

Six others trail Thongchai and Jamieson by six shots.

Oosthuizen added to his collection of agricultural equipment – after raising a few eyebrows when he won the 2010 British Open and spent a large chunk of his prize money on a customized tractor for his farm. On Friday, the South African, Jaidee and an amateur player won the pro-am event.

''I've been nagging my wife for a few years that I want something on the farm as there are a few stumps and things I need to get rid of,'' Oosthuizen said. ''And that's why I stood over that putt on 18 for a bit longer than normal. So I'm going to play around with it and might dig out a few bunkers.''

Oosthuizen owns a farm near Mosel Bay on the southern coast of South Africa.

Meanwhile, Jamieson said he's focused on winning in Durban for a second time in a month. He recently won Nelson Mandela Championship at the nearby Royal Durban course

''I'm definitely comfortable playing here in Durban and the confidence is high as well, which is all-important,'' he said. 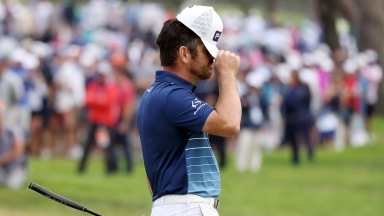 Louis Oosthuizen fell just short of beating Jon Rahm on Sunday at the U.S. Open as he finished runner-up at a major for the sixth time. 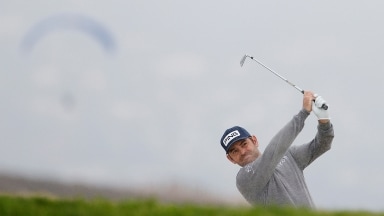 After a fog delay at Torrey Pines, Russell Henley and Louis Oosthuizen share the lead with Brooks Koepka right behind them.