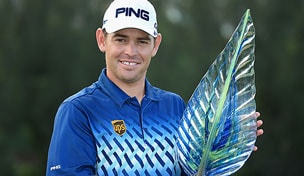 DURBAN, South Africa – Louis Oosthuizen shot a final round 6-under 66 to beat Scott Jamieson of Scotland by a single stroke and win the Volvo Champions on Sunday.

Oosthuizen finished with a 16 under total of 272 at Durban Country Club to wrap up the victory after the Scot narrowly missed a chip on the 18th hole for eagle. Jamieson, who led by five shots heading into the last day, carded a final-round 72, and missed out on second successive European Tour win in Durban by a solitary shot.

Thongchai Jaidee of Thailand (68) was another shot back in third, two strokes ahead of Ireland's Padraig Harrington in fourth.

It was Oosthuizen's sixth career European Tour win and elevated him to a career-high fourth in the world rankings.

''I played very well and hit some great shots, and I'm very happy to start the year like this,'' the South African said. ''I somehow like winning my first event of the season, and it's always good to start in your own country because it feels more relaxed.''

Jamieson won the Nelson Mandela Championship in December for his first tour victory and looked headed for a second title. But he followed two early birdies with a double bogey on the par-4 fifth hole Sunday and then dropped another shot on the 16th.

Oosthuizen gradually erased the Scotsman's lead before overtaking him with his sixth birdie of the day on the 11th hole. He added another birdie on 14 before a short miss for par on the 16th. Jamieson still nearly managed to force a playoff, but his chip on the 18th stopped just inches short of the cup.

''I knew I had to start well to remind Scott that we were still chasing him, and I was very chuffed to be in the lead by the 11th,'' Oosthuizen said. ''I've never been one to start celebrating before I know I've won for sure, and Scott's chip was unbelievable.''

England's Danny Willett (68) and Frenchman Julien Quesne (71) tied for fifth, while defending champion Branden Grace finished with a 67 to end his title defense in 10th place. Crowd favorite Ernie Els rolled in an eagle on the par-5 10th to raise a cheer, but he ended his first tournament of the year in a tie for 18th place after a final-round 70.