Donald breaks driver during first round of Masters 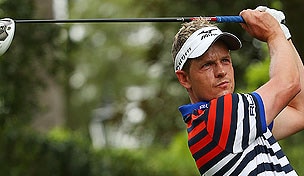 AUGUSTA, Ga. – Luke Donald shot a first-round 71 Thursday at the Masters while paired with Tiger Woods. Playing with Woods always brings its own set of distractions but, in this case, Donald had other things to worry about.

After his tee shot in the par-4 14th hole, Donald noticed that there was a crack in his driver. Donald called over an official and asked him about the ruling. The official told Donald that he could continue the round with the wounded stick. The driver was re-examined after the round and Donald was later told that he needed to get a new one for Round 2.

Problem is Donald doesn’t have a back-up driver and all the TaylorMade equipment reps left the premises Wednesday. He’ll attempt to get one sent overnight to Augusta.

“It’s going to be tough,” Donald said. “I’m going to have to get some drivers here as quickly as possible and obviously not having teed up one, having a fresh one, it’s not where you really want to be. But I’ll manage.”