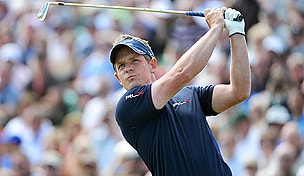 The world No. 3 announced Wednesday that he has extended his contract with the clubmaker Mizuno, which he has used since 2003. Donald had a career year in 2011, when he ascended to world No. 1 (where he reigned for 56 weeks) and won the money title on both sides of the Atlantic.

“I feel as if I am playing as well as ever at this stage in my career,” he said in a statement. “Over the next few years, I want to be in a position to win major championships and to continue to improve each year.”