How long before Ko turns pro? 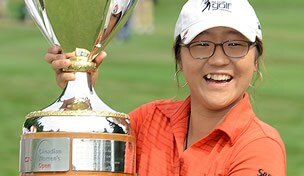 Getty Images
LA JOLLA, CA - FEBRUARY 05: James Driscoll hits a bunker shot on the first hole of the North Course during the first round of the Buick Invitational at the Torrey Pines Golf Course on Ferbruary 5, 2009 in La Jolla, California. (Photo by Scott Halleran/Getty Images)  -

How long will Lydia Ko keep turning down lucrative paychecks to remain an amateur?

The question grows stronger with the 15-year-old sensation preparing to play in the LPGA’s season opener this week at the ISPS Handa Women’s Australian Open.

While Ko’s bank account may not be swelling after winning her third professional title as an amateur in the last 53 weeks, she is on a swift climb in the Rolex Women’s World Rankings.

As an amateur, however, Ko still gets the Rolex World Rankings points.

Ko jumped to No. 30 in the Rolex rankings with her win Sunday. She jumped from oblivion to No. 184 when she won the New South Wales Open late in January 2012. She moved up to No. 45 winning the CN Canadian Women’s Open last summer.

Ko gets another chance to improve her rankings position this week when she tees it up in the LPGA’s season opener. She’s playing the ISPS Handa Australian Women’s Open on a sponsor’s invitation. She also will be playing the Kraft Nabisco Championship in April as one of the nine amateurs offered an invitation to play in the year’s first major championship.

When Ko won in Canada last summer, she spoke of her intent to remain an amateur, even attend college, with a desire to attend Stanford.

Though all this success may be complicating Ko’s future plans, her swing coach, Guy Wilson, told the New Zealand Herald that she plans to remain an amateur for a couple more years. He said her playing opportunities would be too limited if she turned pro now and had to play as a non-member with restricted exemptions on a major women’s tour. He said, however, her priorities may be changing as they relate to playing collegiately.

“She will turn pro as soon as she can, really, to take advantage of the opportunities available to her,” Wilson told the New Zealand Herald. “There’s no point creating this massive profile and then not using it.”

Wilson said college is still a possibility, but . . .

“It’s not the biggest option as yet,” Wilson told the New Zealand Herald. “She wanted to do some college golf, but she’s starting to realize that, hey, that is probably not the best plan, and she should make hay while the sun shines.”