Masters on minds of Horschel, other contenders 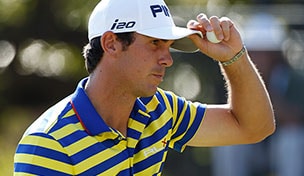 SAN ANTONIO – Will there be a 94th and final Masters participant this year?

Ask the question at your own peril.

Players steadfastly avoid talking about Augusta, perhaps wary of some green-jacket jinx. But if recent form and the current leaderboard are any indication, Billy Horschel seems as good a bet as any to assume the last available spot.

If nothing else, it would fulfill a guarantee he made at Q-School. Last December, at PGA West, he stood next to Golf Channel’s Jerry Foltz, with the cameras rolling, and declared, “I’m going to win on the PGA Tour next year. There are no ifs, ands or buts about it.”

Rarely are such proclamations made at the torture chamber known as PGA Tour Q-School. (May it rest in peace.) Walking off 18 green, most players exhale, not bluster.

It was bold. It was cocky. And, Horschel says, it was true.

“I’m as confident as I’ve ever been, and I feel just as good as anyone else in the world right now,” he said late Saturday. “I have nothing to back that up against, but in my own mind that’s all I care about.”

At 10 under (68-68-70–206), Horschel has a two-shot lead at the Valero Texas Open, where a victory would get him into the Masters. You know, the storyline no player seems eager to talk about this week.

If Horschel, who tied for  second last week in Houston, doesn’t collect the $1.1 million first-place prize, if distractions overwhelm him or if he wilts under the spotlight – all of which seems unlikely, it should be noted – then who?

Perhaps Charley Hoffman, two strokes back, will board a flight Sunday night from San Antonio to Atlanta.

That would surprise, no doubt. It’s been a “very below-average season,” Hoffman conceded. He still doesn’t know how he broke a rib in February, but overuse seems a likely culprit. Nevertheless, he played through the injury in Arizona, and then again in L.A., before shutting it down for six weeks.

When he turns up in these parts, however, he may as well be ranked world No. 1, not his current 176. He hasn’t finished worse than 13th in the past four editions of this tournament, including a runner-up in 2011.

“I’ve been on Tour eight years and I think I know what golf courses I play well,” he said. “This is one of them.”

Is the Masters on his mind? Maybe, but it’s buried beneath thoughts of his health (now about 100 percent), and his family, and an Oaks Course that showed its fangs in the afternoon winds Saturday.

“You don’t base your career on how many Masters you play in,” said Hoffman, who has made only one appearance, in 2011. “I’m looking for win No. 3, and it would be a great bonus if win No. 3 comes with a trip to Augusta.”

It’s been nine years since Bob Estes last made that drive down Magnolia Lane. At 47, the Texan thinks he’s in the midst of a career renaissance, a byproduct of the renewed confidence with his long game.

After struggling for much of the past decade, Estes said optimistically of Augusta, “Actually, I’d be much more looking forward to playing there than before.”

Such nostalgic talk would only tease Marcel Siem, who has flirted with a trip to Georgia far too many times in the past week. Last Sunday, he won the European Tour event in Morocco and was told by local media and officials that he had moved inside the world top 50, only to fall percentage points shy.

“My dad was even more upset that I’m not in,” Siem said, “because I always promised him that I’d take him and Mom to the Masters. It’s a dream come true if I finally make it one day.”

Yes, there is a chance, albeit a slim one.

Because Valero had offered him a sponsor exemption, Siem flew privately from Morocco to his home in Germany, crashed for a few hours, then skipped across the Atlantic and arrived here having slept only a few hours.

Not surprisingly, he appeared sluggish in the first round, opening with 76. But he rebounded with rounds of 67-69, putting him six shots off the third-round lead.

“I’m pretty tired,” he said, “but the Masters is a big goal for me. The rest of my energy, I will suck it all out tomorrow.”

Horschel, however, will try to conserve energy. Maintain focus. Attack targets when necessary. Continue to putt like the cup is the size of a sinkhole.

He refuses to talk about Augusta – “It will be cool, but I’ll worry about that tomorrow if it happens” – and for good reason. All a victory here means, he says, “is that I can check off one of my goals that I’ve had since I turned pro.”

“I think I’ve put everything and done everything you need to do to get to the level to win,” he said. “Whether my time is tomorrow, I can’t tell you right now. But I hope it is.”

Take a number, Billy. So do the rest of the Masters hopefuls.