Kuchar leads by one shot at Colonial after Day 3 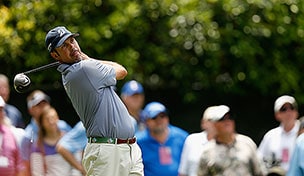 After closing out the second round early on Saturday morning with the lead, Matt Kuchar lost it in the third round but was able to regain it, finishing with a 1-under 69 at the Crowne Plaza Invitational. Here's how it looks heading into the final round at Colonial Country Club, where Kuchar holds a one-shot lead over four players:

What it means: Kuchar is truly the big man on the leaderboard. He hopes to secure his second victory of the year after winning the WGC-Accenture Match Play Championship in February. Several players are looking for their first PGA Tour win, including Every, Stroud and DeLaet. Clark will try to take a week where he was hit with news of the anchoring ban and turn it into a positive. He is seeking his first win on Tour since the 2010 Players Championship.

Round of the day: Clark and Flores surged up the leaderboard, both posting 5-under 65s to climb into contention. Both rattled off six birdies with just one bogey.

Best of the rest: Every birdied the 18th to close out a 4-under 66. He hopes to turn around a disappointing season on Sunday that has seen him record just one top 25 and miss seven cuts. On the other hand, Weekley continues his resurgence this year, looking to post his fourth top 10 of the season. He also fired a 66 to vault into a tie for second.

Biggest disappointment: Jordan Spieth, the 19-year-old former University of Texas star, is trying to become the fourth teenager to win on Tour and first since Ralph Guldahl in 1931. Spieth, however, lost a lot of ground on Saturday. Following birdies on three of the first five holes, the wheels came off with bogeys on Nos. 6,9, 12 and a double bogey on the par-3 13th after he hit his tee shot in the water. He finished with a 1-over 71 and is T-14.

Main storyline heading into Sunday: There's a ton of scenarios that could play out with 23 players within five shots of Kuchar. DeLaet will shoot for his first Tour win. The 31-year-old Canadian is enjoying the Dallas-Forth Worth area, having finished T-10 last week at the HP Byron Nelson Championship, his third top 10 of the season. Defending champion Zach Johnson is lurking just three shots back after a 2-under 68. Kuchar will try to continue his ascent up the world ranking and sharpen his game in preparation for next month's U.S. Open.

Shot of the day: Kuchar began the day with the lead but stumbled with back-to-back bogeys on Nos. 7 and 8. He steadied himself and then striped a 9-iron on the par-3 16th to 15 feet. He rolled in the birdie putt to get back into red numbers for the day and reclaim the lead by himself.

Quote of the day: Jeff Overton was disqualified for using a putting alignment aid on the practice putting green, while he was waiting to tee off on the 10th hole. Soon after coming off the course, Overton tweeted ''3 group back up at the turn. Rules official tells me we can practice chipping and putting. Disqualified for using my practice putting aid!'' Overton immediately followed that with another tweet, ''Why do rules officials initiate that conversation to begin with. I wouldn't even have gone up there if I had know that. What a joke!''