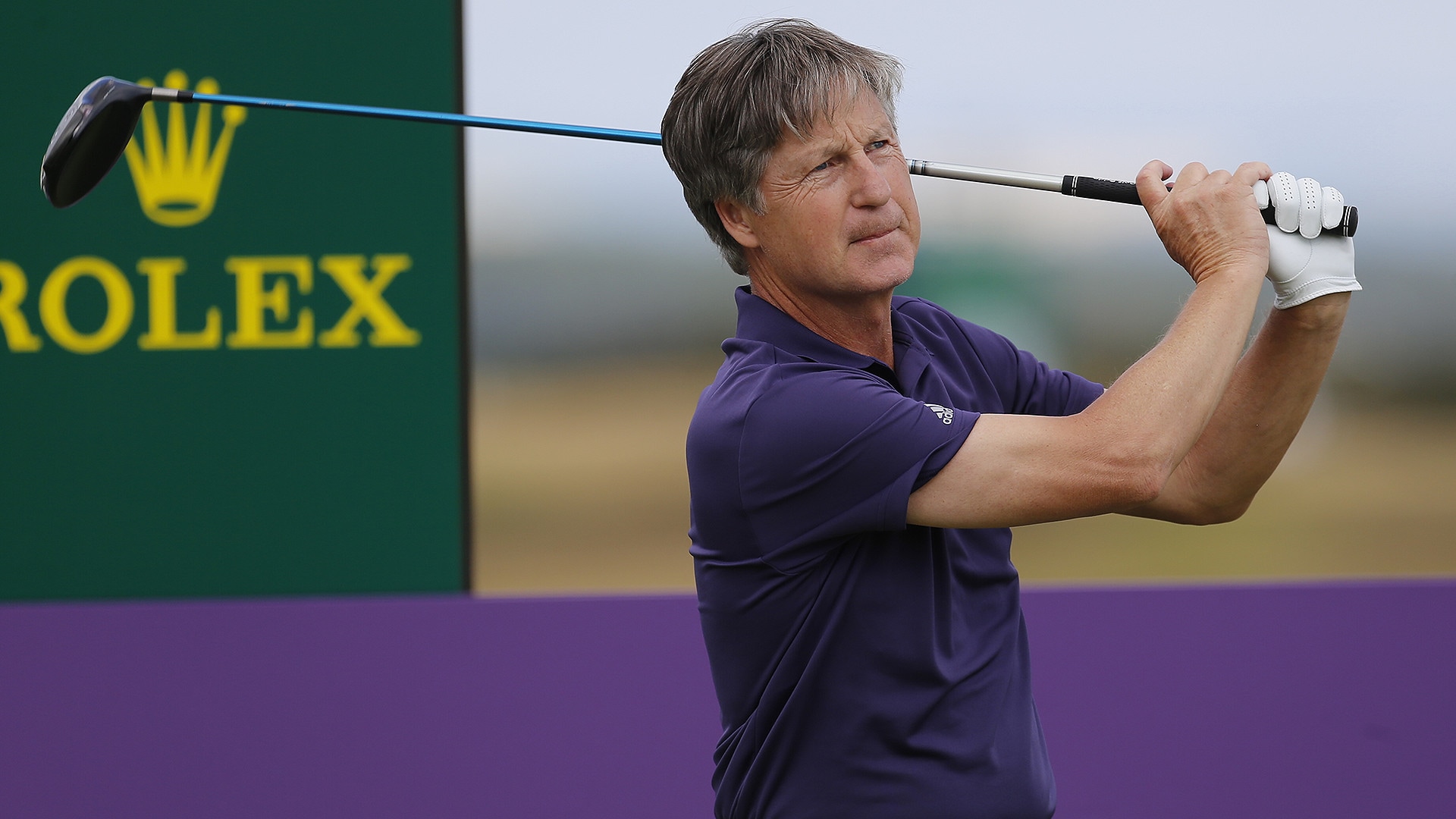 I love sports, and perhaps you do too, for its unassailable clarity. As an athlete, that pass-fail test – against the player you were yesterday; against the team you were last week; your win-loss record – is, like a fire in the kitchen, vitalizing to one’s sense of purpose. If I missed anything about competing, it was this. So when my wife, Bailey, told me a few months ago about The Senior Open being played at the Old Course at St. Andrews the week after The Open, where I was going to be on-site for “Live From” shows, I suddenly had a reason to practice again.

It had been a decade and a half since I really cared about what I shot. Playing only a dozen or so times a year in outings or on the odd golf trip here and there, I had settled into to a weird relationship with my game. I didn’t ask much of it, so it didn’t often disappoint me. Kind of like an estranged couple who had decided to stay married but not talk to each other, I slept in one bed, my golf game in another.

But now I wanted to dress it up and take it out on a date and as I practiced my game kept saying no; kept promising to embarrass me in public even, if I didn’t drop this silly idea. Then my body staged a mutiny. My hands ached and depending on the day, my back, my sides, my abs, my hamstrings and my glutes all conspired to stop the nonsense. It’s as if they had all been talking behind my back, asking what the hell had gotten into me and finally agreeing to show me who was boss. I stopped practicing and went back to working all day on other things.

And that’s when my wife put up the sign: 56 Days Until The Senior Open.

I hate asking for help, perhaps to my detriment. Doubtful that comes as any shock, but I enjoy the discovery process found in solitude almost above the thing discovered. Besides, I had, at least in my mind, been led so far astray from the proper golf swing in years past that I was reluctant to ever consult a teacher again. But a few things had changed. I have spent years studying the best players in a way that I had not as a player and I found a teacher, Lucas Wald, whose views on the swing aligned with mine.

My ball striking started to improve, such that after a few sessions with Lucas, I could hit scores and scores of shots that, passing through the right window in the sky, wouldn’t move but the few feet I wanted them to fade. Confidence can leave one like a thunderbolt, but it comes back incrementally. So there I was, a humorous blend of contradictions when asked how I thought I would do – somewhere between 64 and 78, I’d think. The analyst in me said, no chance. The player in me had left a long time ago. The truth was, I didn’t know.

Besides being asked how I felt I would do, the question I got more often was if I realized how much fuel my poor play might give those looking to criticize me. I’d be lying if I said I didn’t give it some thought, but the thought of competing again means one has to risk embarrassment with an obdurate mix of ignorance and certainty.

Arriving in Scotland a few days early to play the Old Course – along with my wife on the occasion of a friend’s birthday – and then to Scotscraig for a couple of practice rounds at my qualifying site, I found no reason to worry about my game. I was driving it up a gnat’s ass as they say, long and straight.

But then I had to go to work and that left little time for my golf game; although, I did manage to squeeze in a few practice sessions at Panmure, just across the street from Carnoustie.

The first shot I hit in the Monday qualifier finished in a pot bunker, barely leaving me any room for escape and I was lucky to make a bogey. Six holes later I was 4 under par. Missing birdie putts of 10 feet at my eighth and ninth holes, I turned in 32. An inward 37 gave me a 69 on a very tight course, on a windy day, which tied medalist honors. It was off to the Old Course.

I had arranged a practice round with Tom Watson for Wednesday morning, very early, and I have to admit, I was nervous. Not so much with the idea of playing alongside a legend at the Home of Golf – although that is daunting enough – but rather about what I was going to say to him concerning his ailing wife, Hillary. In 2015, during the wind-out at the 2015 Open at St. Andrews, I sat in a coffee shop and talked to Hillary for a few hours. Sharp and warm, she had thanked me for some kind remarks I had made about Tom most recently. Now I had heard she was at MD Anderson in Houston and the news wasn’t good. Words always fall short of expressing the sorrow that one feels upon hearing news like this, but as I was sitting at dinner Tuesday night I got a text that Tom was exhausted and out for the practice round. I certainly understood.

My tee time for Thursday was at noon and my playing competitors were Kevin Sutherland, who had won the Charles Schwab Cup last year, and a player I had never heard of from Argentina, Mauricio Molina.

Have you ever tried to force like poles of magnets together? That shudder feeling you get. That’s what I was trying to quell on the first tee before I teed off. Looking back, I can’t really say why. I was confident in what I had been doing and looking forward to the day, but as I stood there a flood of athletically taboo thoughts ran through my head and I could feel my eyes narrowing to potato chip thin.

The thing about the Old Course is that one rarely, if ever, gets a good number. Every shot is a “tweener” because the wind is quartering help one minute and quartering hurt the next and that capriciousness makes such a huge difference in the club, shot shape and landing target. The fairways roll, fall off, and rise here and there, and so one has a slightly awkward lie off of fairways that are the most brutally bare in all of golf. The tightness of which makes Augusta National’s look like fluffed up zoysia.

Five pot bunkers aside, I hit the ball very well for two days, but never in my preparation had I anticipated putting so poorly. With each green I hit, it was as if I was a criminal walking up to an interrogation and being asked questions in which I too frequently gave the wrong answers.

Sutherland and Molina, however, played beautifully and almost without mistake. There was a rhythm to their games that was missing from mine, perhaps not evident in a hole or two, but unmistakable over 18 and 36. I knew Kevin’s game and when other players had heard I was grouped with him, the response was get ready for a “stripe show,” which is the highest compliment one professional can give another in terms of ball striking. High laser like draws are his calling card, and it was fun to watch him play. Educational even. As for Mauricio, well, I hadn’t seen much like him in my golf life.

He was shorter than me by a couple of inches, 5’7” I’d say, and he was a little portly as well. I thought he would make a quick little punchy move by his build, but he turned his shoulders like a top, close to 120 degrees I’d guess, and then he melted the ball on a terrific arc, the longest of the group off most tees. On the green, he had soft looking hands on the putter. He would bend over and get in this marvelously split-elbowed, athletic looking position and then draw the putter back and his whole body would move into each putt like he was going to race the ball to the hole. His touch was stupefyingly good. Bobby Locke did this a long time ago, so long, in fact, that people have either forgotten about it or long ago dismissed it as a peculiar but effective move that was never to be copied. Mauricio reminded me of Ian Woosnam off the tee and Locke on the greens.

As I was playing the last hole on Friday, having just crossed the Swilcan Bridge, I was overcome with emotion. A few holes before, on the 14th, I peered out on the landscape and the town beyond it and all I saw was stygian gloom. I had been looking forward to the camaraderie of the group, but the spirit of voluntary communication had left me, and I wondered why I had put myself through such misery. But as I putted out on 17 and turned toward the most magnificent backdrop in all of golf, it suddenly all seemed worth it. I thought to myself that I may never get to hit another shot in golf so close to the marrow of what this game is all about.

Golf is a game where skill can carry you only so far; the last bit of the journey is about character. And by character I don’t mean temperance and trustworthiness, I mean being always able to maintain that perfect disposition to train oneself the right way and then to play the game in such a way that your every move puts you at a slight advantage to your competition. There is a psychic heft to this type of player, that if one looks close enough is prettier than any swing.

The Old Course rewards great character in a player and then gives you the easiest finishing hole in golf to think about what you have just accomplished or failed to accomplish, and that clarity is hard to find off these links. I teared up a little just past the Swilcan Bridge, then sobered up a little when I heard Kevin call my name. “Have you ever seen anyone with the touch of Mauricio?” he asked, to which it I replied, no, but then it hit me and I mentioned that Ben Crenshaw had once said he felt like he moved into his putts, Locke certainly moved into his, and so did Walter Hagen. Kevin said he might just give it a try. I went up and got my yardage: 87 yards off an insanely thin lie into the wind, with the hole cut back-left just over the Valley of Sin on the ridge. It was a tweener, a three-quarter wedge, which hit the pin and stopped 10 feet away.

I missed the putt, of course. 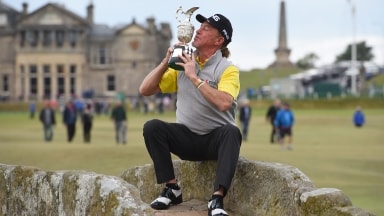 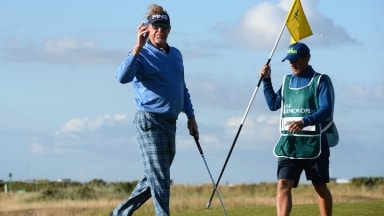 Miguel Angel Jimenez shot even-par 72 in blustery conditions to remain 9 under and two shots clear heading to the final round of the Senior Open. Five-time Open champ and three-time Senior Open champ Tom Watson once again dialed back the clock at St. Andrews, but only for 13 holes.