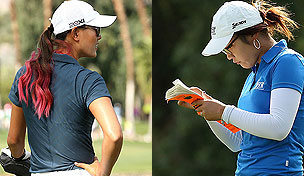 RANCHO MIRAGE, Calif. – Lydia Ko says she idolized Michelle Wie growing up, but she turned this relationship upside down in their pairing Thursday at the Kraft Nabisco Championship.

It was the 15-year-old Ko inspiring the 23-year-old Wie in the first round.

Ko’s youthful bliss was in some ways like an astrophysical gift to Wie, a magic ticket to the past and the feelings that came at the start of Wie’s own run as a phenom at Mission Hills’ Dinah Shore Course.

Wie opened with an even-par 72, equaling Ko in the start to the year’s first major. They’re just four shots off the lead.

While Wie did not go as low as she did in some of her youthful blitzes on this course, Thursday was a promising show of improved form. Wie arrived this week having missed the cut in all three full-field events she has played this season. She arrived under a growing cloud of doubt over whether she will ever fulfill the great promise she generated in this event. She also arrived determined to turn her game around.

“Puts me back on memory lane,” Wie said of the Ko pairing. “You kind of have to play like when I was 13, just kind of go out there and really just be in awe of everything.

Wie was encouraged because her 72 felt as if it could have been so much better.

“Two stupid mistakes on the back nine, but it feels good,” Wie said. “It feels good to show I could have shot 66 out here, and it feels good to know I left a lot of birdie chances out there. I’m just excited for tomorrow. I just can’t wait to get out there and make some birdies.”

Wie tied for ninth in her first appearance at Kraft Nabisco when she was 13. She made news around the world becoming the youngest player to make a cut in an LPGA event, and then she made bigger news tearing up the Dinah Shore Course in the third round. She shrunk the layout with monster drives on her way to a 66 that Saturday. Stunningly, the effort earned her a spot in the final Sunday pairing with Patricia Meunier-Lebouc and Annika Sorenstam, the game’s most dominant player.

While Wie faded that Sunday and Meunier-Lebouc won, Wie’s star was blinding in so many ways. She would finish fourth at Kraft Nabisco as a 14-year-old and tie for third in the championship as a 16-year-old.

This is the event where Wie most fueled speculation she would eventually dominate the women’s game.

Wie, of course, has struggled as skepticism grows that she will never reach the grand heights projected.

That was reinforced with Thursday’s release of a Sorenstam interview in Golf Magazine’s newest edition.

“What I see now is that the talent we all thought was there is not there,” Sorenstam said in the Q&A.

Wie said after Thursday’s round that Sorenstam apologized to her Wednesday night.

“She actually reached out to me last night, said a couple things got misquoted, and I thought it was really nice of her to reach out to me,” Wie said. “She apologized for what she said, and I accept it, and that’s that.”

If Wie is going to find old magic, this venue would seem the fitting place.

“I had such an amazing experience playing here as an amateur,” Wie said. “I think it’s why Kraft is so special, because it gives amateurs these opportunities to play with pros, and it just brought me back to memory lane a little bit.”

Those teen phenom years seem so long ago in Wie’s career. In the first release of the Rolex Women’s World Rankings in 2006, Wie was No. 3. She was 16 years old.

Injuries, chasing a dream to compete against the world’s best men, devoting herself to gaining a degree from Stanford, too much parental influence – they’ve all been blamed for Wie’s struggles. So has Wie’s unending battle with her putter.

Frustrated on the greens, Wie went to a unusual putting stance late last year where she is dramatically hunched over at the waist. She putts with her upper body parallel to the ground. Her arms are raked in tight to her sides. She said she was inspired by the notion that Ai Miyazato and Jiyai Shin are such good putters, and they’re both so short, so close to the ground. Still, Wie’s crazy contortion has puzzled the most respected observers of the game.

“I'll be as candid as I can be,” Hall of Famer Judy Rankin said. “I see nothing good about it.

“I don't think in that position a person can even clearly or comfortably see their line. I think it completely inhibits any freedom of movement, and it cannot possibly help your touch. And if I were advising her, I would tell her, enough with that experiment, let's do something that might be more productive.”

Wie’s pairing with Ko can’t help but make golf fans contrast and compare. Ko’s rise is even more remarkable than Wie’s. Ko won the U.S. Women’s Amateur last year and two weeks later became the youngest winner in the history of the LPGA claiming the CN Canadian Women’s Open at 15. She was still 15 when she became the youngest winner of a Ladies European Tour event this year.

“I guess a lot of people put us in comparison, but I don’t like to compare,” Wie said. “I think she’s really good on her own without having to compare her to me.”