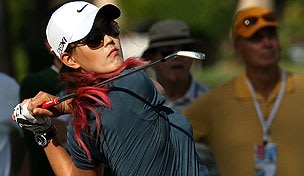 After Annika Sorenstam questioned Michelle Wie's talent level in a recent interview with Golf Magazine, Wie said Sorenstam apologized to the 23-year-old Wednesday night, saying the comments were taken out of context.

'She actually reached out to me last night, said a couple things got misquoted,' Wie said after her opening-round 72 at the Kraft Nabisco Championship. 'I thought that was really nice of her to reach out to me. She apologized for what she said, and that's that.'

As part of the Golf Magazine piece, Sorenstam made a series of pointed remarks about Wie, who has yet to win a major championship and struggled to 10 missed cuts in 23 starts last season.

'What I see now is that the talent that we all thought would be there is not there,' said Sorenstam.

The original interview was conducted in question-and-answer format, raising questions about how the comments could have been misquoted – questions that Wie did not answer. Though she noted she had received an apology from Sorenstam, Wie also added that she was unaware of the specific comments made about her by the 10-time major champion.

'I didn't read it, so I don't know what she said,' explained Wie.