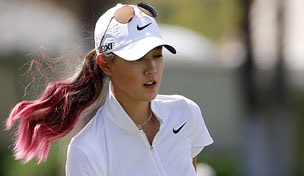 With a 2-under-par 70 in the second round, Wie continued to fight her way up the leaderboard in her best performance so far this season.

“I think 2 under par is a really good round out here in the wind,” Wie said. “Going into the weekend I feel good. I feel confident. I’m just going to go have fun out there like I did the last two days.”

Wie’s wild round included some strange lies. She had to play out of an embedded lie, and she got up and down after knocking a shot into the scoring tent at the ninth hole. She was energized making some big birdie putts in that unusual, hunched-over putting stance, but she also endured some frustrating misses. She three-putted the 10th and 18th greens.

“Overall I made a lot of great putts,” Wie said. “I think there were a lot more positives than negatives, and I think I’m really going to focus on that.”

Ko struggled with the winds coming up late and bogeyed two of the last three holes.

“I think she played really well,” Ko said of Wie. “She holed a couple really good putts. She put shots into places where she could make birdies.”