Mirage or impending miracle? Phil Mickelson has everyone pondering at the PGA 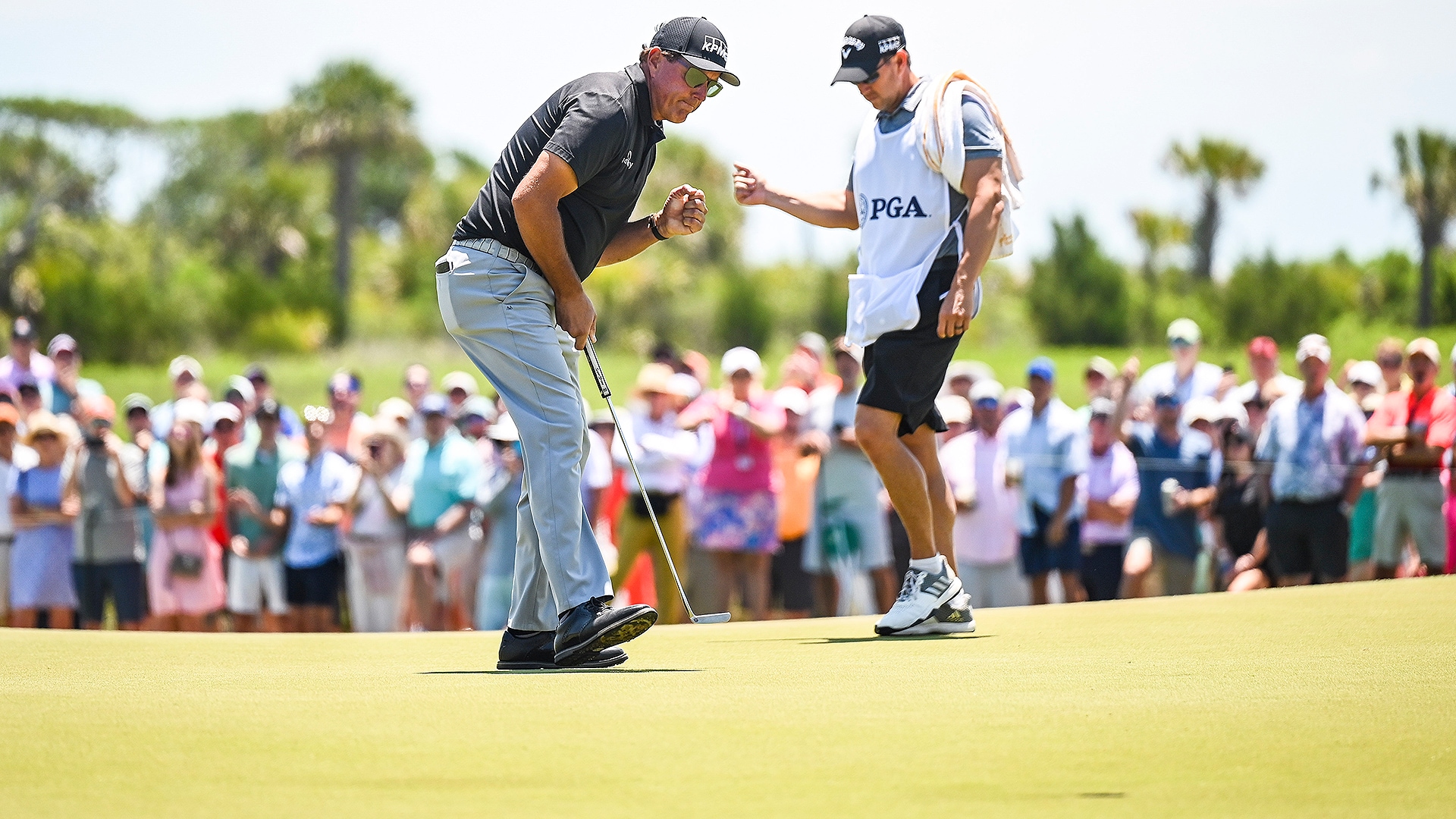 KIAWAH ISLAND, S.C. – The most unlikely of storylines is unfolding here at the PGA Championship: An aging warrior who battles concentration issues, legendary inaccuracy and is a half-decade removed from major-championship contention doesn’t just find himself in the mix on a penal, windswept course once dubbed the most difficult on the planet.

Phil Mickelson, ahead of all but one after 36 holes at Kiawah Island.

Friday was one of those what’s-happening-here days at the PGA. On a sun-splashed afternoon with fans once again out in full force, Mickelson rolled in a 20-footer on the last, pumping his fist four times, to polish off a 3-under 69. At 5-under 139, he was two shots clear of the deepest major field of the year when he signed his card.

“If you were to tell me that Sunday night, I’d really enjoy that, but right now there’s a lot of work to do,” said Mickelson, who was eventually tied by Louis Oosthuizen. “The fact is, I’m heading into the weekend with an opportunity, I’m playing really well, and I’m having a lot of fun doing it.” 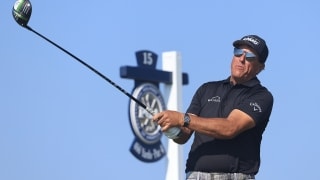 Phil thrills: Mickelson highlights from Rds. 1 and 2 of the PGA

Ranking the likeliest contenders heading into the week, Mickelson would have been considered somewhere near the bottom, just above the club pros. You’ve seen the aerials of Kiawah and read the horror stories: There’s trouble everywhere. Water. Sand. Dunes. Fescue. Beach. Gators. Swinging from his heels, Phil the Thrill figured to find it all, author a few memorable escapes, do a few goofy things to boost his Meltwater Mentions, and it’d all be tremendous entertainment.

But Mickelson actually contending? No way. He popped up two weeks ago at Quail Hollow and predictably faded over the weekend. He probably will here, too. You know, the law of averages. Reverting to the norm. He can’t keep driving it this accurately, flagging it this tightly, rolling it this nicely ...

“I wouldn’t put it past him,” said Padraig Harrington, who has battled with Mickelson for the past three decades and was grouped with him for the first two days at Kiawah. “I think he has the bit between his teeth. I think he believes he can do it in these conditions.”

Sure, there’s a long way to go, but finishing this off would be historic: Mickelson, a month shy of turning 51, would be the oldest major champion by nearly three years, crushing the record set by Julius Boros when he won the 1968 PGA at 48. Already, Mickelson is in elite company as the oldest halfway leader of the PGA since then-54-year-old Sam Snead in 1966.

There are reasons to be skeptical that this can continue all weekend. He doesn’t have a top-10 in nine months. He doesn’t have a top-10 in a major in nearly five years, since his epic duel with Henrik Stenson at Royal Troon. He is below-average in every major statistical category; ranked 176th for the season in strokes gained: tee to green, he’s third in that stat this week. So far.

But there’s also no metric that can quantify Mickelson’s competitiveness and will to win. Few in the game’s long history have been this good for this long. At an age when most of his peers are la-di-da’ing their way through the senior tour, Lefty is hitting the gym as feverishly as ever, tinkering with his swing and ramping up his speed to hang with players who are bigger, stronger, faster – and, most importantly, better. Competitive jealousy can be an intense motivator.

“That can be the hardest thing as you get older and there’s a new kid on the block and you’re wondering if you can compete with him,” said Harrington, 49. “I can’t go out on the golf course and feel like I’m giving up something to the field. If 10% of the field are reaching a par 5, I want to be one of those 10%, and I think Phil is in that same category as well. He wouldn’t feel good if he had to go back and play in the middle of the pack. He wants to be in that 10% that’s capable of hitting any shot at any time out there so when you’re coming down the stretch, you’re not hampered by not being as physically good as the next guy.”

Oh, Phil looks plenty good physically: On a course as demanding as any in the world, he has fired bogey-free inward nines of 31 and 32 to set the pace. “Some fine golf there,” Harrington conceded. Through two rounds it’s been a complete performance: Utilizing a 2-wood that he can keep below the wind, Mickelson has found enough fairways through two rounds (60%) to put himself in position to attack. From there, he and brother/caddie Tim have expertly gauged the whipping crosswinds. And then he’s dropped a field-high 12 birdies, flashing the fans so many thumbs that he risks a hyperextension.

“He’s still Phil Mickelson to me,” Cameron Smith said. “He can show up and he knows that he can win. He walks around like he can still win, and he talks the talk. It’ll be tough to catch him, I think.”

That will depend less on Mickelson’s physical skill than the war waging within. Over the past few years (and as recently as two weeks ago) he lamented untimely lapses in concentration that have led to on-course blunders and higher scores. Resolving to fix the issue, he’s tried to re-train his brain in practice by playing as many as 45 holes in a day, focusing on each shot. “That way when I go out and play 18,” he said, “it doesn’t feel like it’s that much.” He’s also meditated for longer periods of time. “I’m trying to use my mind like a muscle and just expand it, because as I’ve gotten older, it’s been more difficult for me to maintain a sharp focus, a good visualization and see the shot.

“Physically, I feel like I’m able to perform and hit the shots that I’ve hit throughout my career, and I feel like I can do it every bit as well as I have, but I’ve got to have that clear picture and focus.”

Apparently, Mickelson’s focus was elsewhere Friday afternoon. After not speaking to reporters following an opening 70, he went through the broadcast-partner car wash before making his way to a packed media tent, his mirrored aviators still on. A PGA official warned that Mickelson would only take three questions because he was on a “tight schedule,” never mind that he’d finished his round at 1 p.m. and had roughly 25 hours until he was set to play again – a reminder that, even in the twilight of his career, he still plays by his own rules.

“I’m having a lot of fun,” he said, after a reporter squeezed in a quick follow-up. “To be in contention, to have a good opportunity, I’m having a blast. I’m excited for the weekend.”

Mickelson’s schedule wasn’t so tight, of course, that he scurried off property. Following his presser he headed straight to the putting green for 10 minutes of practice, and who could blame him? A major weekend awaited, and he wasn’t about to squander this improbable opportunity.