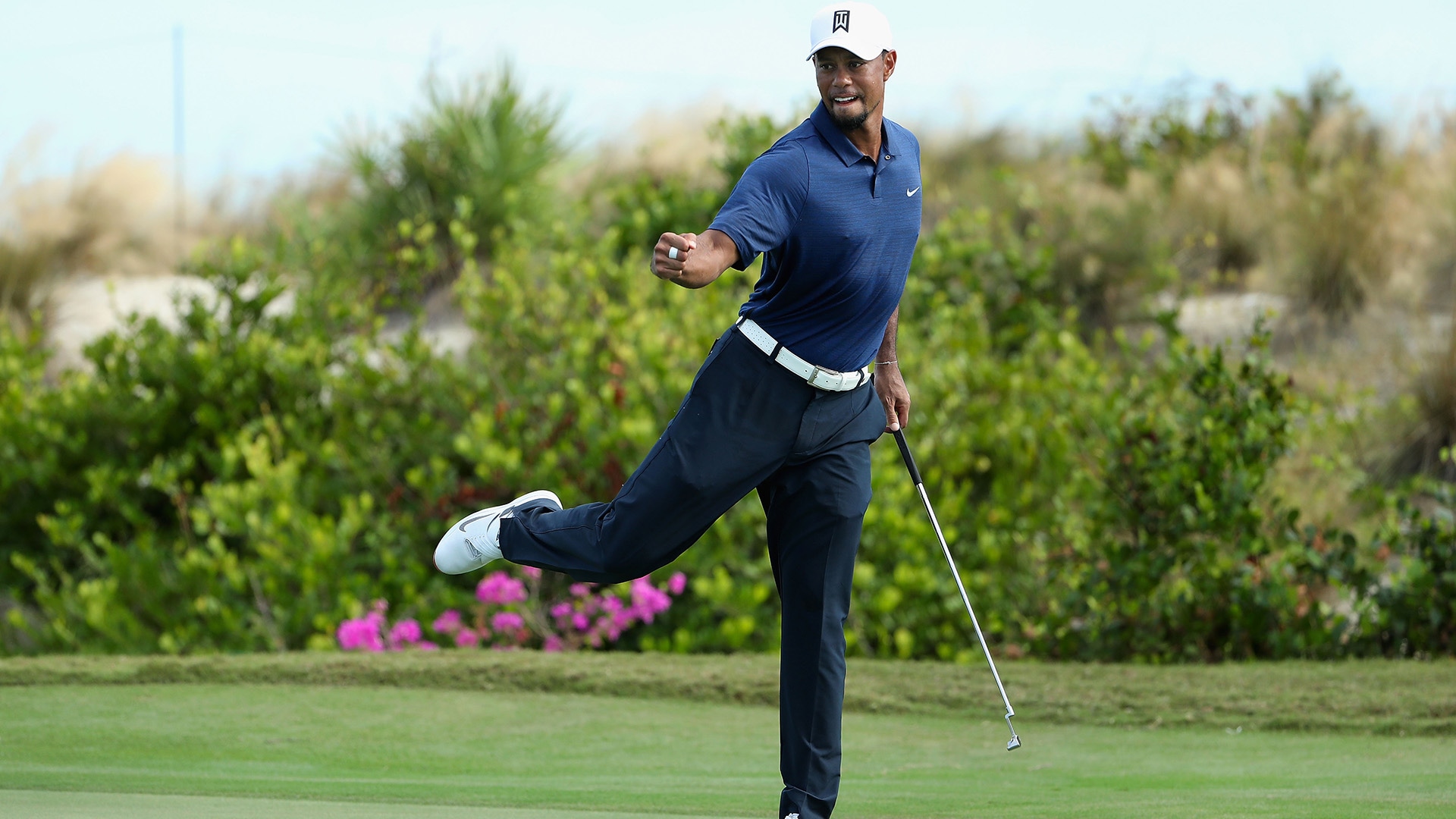 Tiger Woods gets set for his return to competition, President Donald Trump makes (quick) time for golf during the holidays, the governing bodies float out the idea of diversifying the ball offerings and more in this week's edition of Monday Scramble:

In a week where most of us spent time scarfing down leftovers and sharing reasons to be thankful, the golf news cycle rolled right along with two prominent names at the top.

A normally quiet stretch of the season, with the PGA Tour beginning its longest hibernation of the year, still received plenty of attention because of the presence of Woods and Trump.

The fact that the two men intersected for a leisurely round together without breaking the internet shows that we are in a quiet portion of the calendar, but it's still a testament to the interest in both that golf became a discussion point this weekend around turkey, stuffing and football.

Amid this season of reflection and giving thanks, one thing is certain in golf media: with Tiger and Trump making headlines, there will always be something to talk about - even when the sport makes a rare attempt at having an off-season.

1. We start with Woods, whose return to competition this week is somehow being greeted with as much, if not more, anticipation than the same scenario a year ago.

Last year he made his first competitive swipes in more than 15 months at the Hero World Challenge, where he finished 15th out of a 17-man field. This time he'll be teeing it up for the first time since early February, less than two months removed from comments where he entertained the notion of never playing competitive golf again.

It's a remarkable course correction, one whose Zapruder film intrigue has shifted from Twitter videos to first-hand accounts of Woods' game.

2. Quickly becoming an annual fall tradition akin to pumpkin pie, the eyewitness accounts of Woods' on-course progress are rolling in at record speed.

After Rickie Fowler explained earlier this month that Woods was hitting it "way by" him at Medalist, Jason Day told reporters in Australia that Woods is currently "the best he's ever felt in three years."

Then came Brad Faxon's detailed account of their round together over the weekend, where he shared that Woods hit it past world No. 1 Dustin Johnson on half the holes.

It all adds up to brimming optimism surrounding Woods' return, a four-day harbinger of what might be in store for 2018 and beyond.

3. But nothing quite matches hearing from the man himself, as Woods' presence in the Bahamas meant that Hero tournament week started a full day early.

Woods zipped around Albany in a cart, with caddie Joe LaCava along for the ride. Afterwards, he explained that "life is so much better" following his lumbar fusion surgery in April.

There's sure to be rust this week as he rounds out a star-studded field amid the sandy fairways at Albany, but the thought of an optimistic Woods holding his own for 72 holes - and more importantly, remaining healthy for more than a couple days at a time - is enough to merit a quick peek at the countdown clock to the Masters.

4. While Woods played over the holiday weekend with Faxon and Johnson, the fourth in the group just happened to be the leader of the free world.

According to Faxon, the best-ball match ended in a tie with Woods and Johnson tipping out Trump International around 7,600 yards while he and President Trump played the blue tees at 6,500 yards.

5. One day after his round with Woods, Trump shifted gears by playing with the only golfer ever to win more major titles.

Jack Nicklaus teed it up with the president Saturday at Trump's course in Jupiter, Fla. Nicklaus has worked together with Trump on course projects and was vocally supportive of his potential in the White House, both before and after the election.

"I like what Donald has done," Nicklaus said last year. "I like that he's turning America upside down. He's awakening the country. We need a lot of that."

No word on how that particular match ended up, but it's hard to think of a better 36-hole itinerary than playing with Nicklaus and Woods in the span of two days. Then again, when you top the organizational chart in Washington, D.C., you can sometimes get the tee sheet to bend in your favor.

6. A change to the rules is far from imminent, but the USGA and R&A appear willing to at least consider an equipment option that might restrict some of the eye-popping distance numbers top players continue to uncork.

The two governing bodies are researching the topic together, and last week USGA executive director Mike Davis went so far as to say that the recent uptick in distance has "horrible" implications.

Davis' remarks weren't tied to the 400-yard drives themselves, but rather to the ripple effects they cause. Longer shots mean longer courses, which means expanded footprints and ultimately increased maintenance costs and environmental impact.

"I don't care how far Tiger Woods hits it," Davis said. "The reality is this is affecting all golfers and affecting them in a bad way. All it's doing is increasing the cost of the game."

It's an intriguing angle with which to approach the situation, and Davis' comments signal the powers-that-be might finally be willing to listen to calls for change.

7. But make no mistake, the possible introduction of a tournament ball won't go down without a fight from equipment manufacturers - specifically Titleist executive Wally Uihlein.

In the wake of Davis' comments, Uihlein wrote a stern letter to the Wall Street Journal questioning some of Davis' claims and insisting, among other points, that the motivation for longer "championship" golf courses was simply to sell more houses along the fairways.

As one of the leading ball manufacturers, Titleist could potentially have the most to lose from any effort to curb technological innovations, even if a reduced-distance model were offered to complement - not replace - consumer options. It seems like the seeds have been planted for what could become an intriguing power struggle within the game.

8. The groundswell to "do something" about the ball certainly did not start at the USGA offices.

The chorus of players adding their voice to the issue has included Woods and, more recently, Geoff Ogilvy. The former U.S. Open champ is one of the most thoughful players with a microphone in his hand, and last week in Sydney he compared the distance craze to the use of aluminum bats in baseball.

"We’ve completely outgrown the stadiums," Ogilvy said. "So do you rebuild every stadium in the world? That’s expensive. Or make the ball go shorter? It seems relatively simple from that perspective.’’

9. There was some actual tournament golf played last week, including an almost-perfect homecoming for Jason Day.

The Aussie was making his first start Down Under since 2013, and he carried a one-shot lead into the final round of the Australian Open. But the birdies dried up in a difficult final round, where he fell back into a tie for fifth as 22-year-old Cameron Davis surged to victory.

It was great to see Day back in Australia playing in a top-notch event. The finish, though, was another example of just how frustrating the year has been for a player who was ranked No. 1 as recently as February but now sits outside the top 10.

With caddie Michael Greller back home with a newborn, swing coach Cameron McCormick took the bag and helped Spieth to an eighth-place showing in an event he has won twice before.

Lifting the Stonehaven Cup proved to be a predecessor for Spieth's major triumphs in both 2015 and 2017. Next year he'll look to show that it's not a requirement as he tries to track down major No. 4.

After the two-time NBA champ exceeded expectations with his appearance at the Web.com Tour's Ellie Mae Classic in August, now it's country superstar Jake Owen's turn to try his hand against the world's best.

Owen is an avid golfer and regular partner with Spieth at the AT&T Pebble Beach Pro-Am, and he'll play in his hometown at the Nashville Golf Open in May. His 3 handicap is pretty stout compared to most amateurs, but it's also a far cry from the 0.8 Curry currently posts.

Owen is almost certain to miss the cut, and likely won't be as competitive as Curry was with rounds of 74-74. But before the "he's stealing a start" crowd gets riled up, remember that both Curry and Owen accepted unrestricted sponsor invites. Even two rounds in the 80s will bring attention and media to a circuit that often struggles to gain traction, and that's never a bad thing.

Officially Expecting: Gerina Piller. The former Olympian and Solheim Cup hero announced that she'll miss the start of the 2018 LPGA season because she is pregnant with her first child, due in May.

Still in Shock: Cameron Davis, who appeared beside himself after hanging on to a one-shot win at the Australian Open. The win vaulted Davis - who had won at Royal Sydney as an amateur only two years prior - from No. 1494 to No. 229 in the world rankings.

Better Late Than Never: Wade Ormsby. The 34-year-old Aussie finally broke through at the UBS Hong Kong Open, holding off a group that included Rafael Cabrera-Bello for his first European Tour win in 264 career starts. To the resilient go the spoils.

On the Mend: Davis Love III, who is back to rehab following hip replacement surgery. The 53-year-old has targeted the Florida swing in March for his return to the PGA Tour.

Ko 2.0: Jin Young Ko, no relation to Lydia, who announced her intentions to join the LPGA tour before guiding a group of Korean LPGA Tour stars to victory in a team event against LPGA pros from South Korea.

Packing for Scotland: Former PGA Tour winners Matt Jones and Jonas Blixt, who along with Davis, qualified for The Open at Carnoustie based on their finishes at the Australian Open in the first of 15 Open Qualifying Series events.