Monkey off his back, Casey freed up to win again 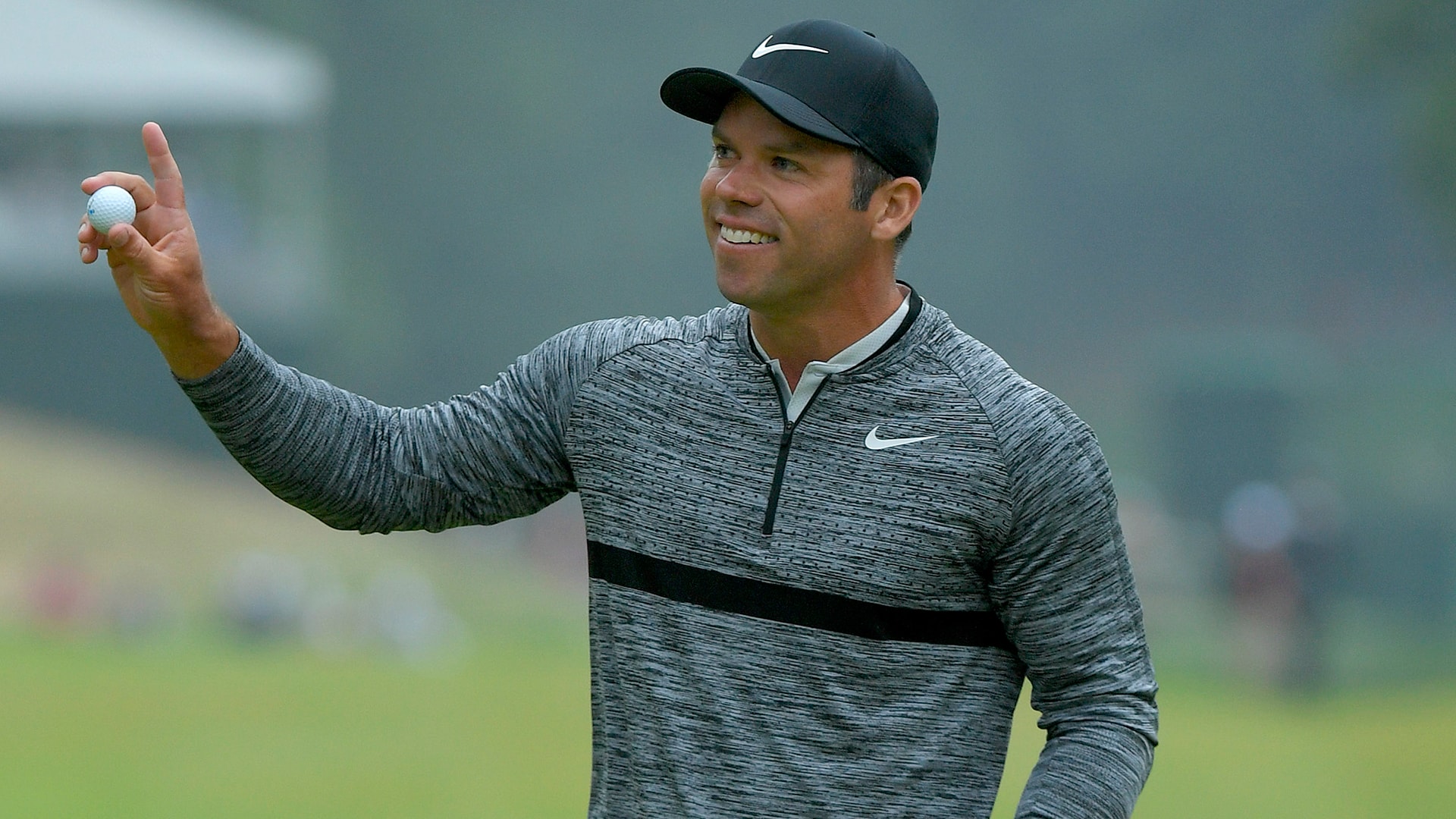 CROMWELL, Conn. – Paul Casey is flushing his irons, rolling in putts and no longer fielding questions about a lengthy victory drought. For the remaining players looking to chase him down at the Travelers Championship, it adds up to a terrifying combination.

The Englishman felt right at home on a gray and dreary afternoon at TPC River Highlands, vaulting to the top of the leaderboard with an 8-under 62. It was the lowest round of the week, two shots better than the next best effort Saturday, and it turned a two-shot deficit into a four-shot lead heading into the final round.

After enduring an afternoon logjam, with as many as five players sharing the lead at one point, the tournament is now Casey’s to lose – and he’s not shying away from the burden.

That approach is undoubtedly aided by the magic act Casey pulled off in March at the Valspar Championship. Teeing off well before the tournament leaders, he shot a final-round 65 and watched as the likes of Tiger Woods and Patrick Reed were unable to match his number.

Without having to field a single question about the weight of the burden he shouldered, about ending a PGA Tour victory drought that extended back to the 2009 Houston Open, Casey launched the monkey off his back and into the trees lining the 18th fairway at Innisbrook.

While Casey has won 13 times on the European Tour, including five times from 2009-14, his dry spell on this side of the Atlantic had become a point of discussion and one that wore on the affable veteran. But one sublime round in Tampa rendered it moot, and it will also grant him an extra sense of calm heading into the final round outside Hartford where only Russell Henley will start the day within five shots of his total.

“If I hadn’t won in a while, then yeah, there would be more pressure. I sit here right now with no nerves,” Casey said. “I’m sure there will be tomorrow, but no nerves now. I’m very happy with what I’ve done. In years past maybe that wouldn’t have been the case because there hadn’t been enough wins.”

Granted, this is an event that often doesn’t follow the script. Birdies will be there for the taking on a course softened by light rains, and low scores shouldn’t be hard to find. This is, after all, where Jim Furyk shot a 58 two years ago and where Kevin Streelman ended his comeback victory in 2014 with a run of seven straight birdies.

Trailing by six, Bubba Watson floated the notion of needing a 60 to catch Casey without any hint that the score is out of reach. Jason Day, who like Watson trails by six at 10 under, quickly sniffed out Casey’s long-term track record like a shark seizing on a droplet of blood.

“Tomorrow it all depends on how Paul plays,” Day said. “I know that he in the past hasn’t quite got over the line with some of the wins that he possibly could have won, and that’s kind of a positive in my mind knowing that.”

But the look of calm confidence that emanates from Casey is that of a man who no longer has to answer questions about when The Win will come. His next victory will be just that, the next one. Another trophy to add to the decorated credentials of a player who has re-established himself in the game’s upper echelon over the past three years.

He’s back on a course he has thrived on from the very first time he set foot on the property, losing in a playoff to Watson in 2015 in his tournament debut. He has returned each year since, finishing T-17 and T-5.

His final-round 71 in 2016, carded the same day Furyk shot his 58, is proving more and more to be an aberration since each of his other 14 competitive rounds in Cromwell have ended up in the 60s. That includes three straight this week, capped by Saturday’s effort where he hit every green in regulation and tied his career low score on Tour.

Yes, the tournament is Casey’s to lose. But liberated by a recent win and playing some of his best golf at one of his favorite venues, there’s little reason to expect him to do anything but lift the trophy he barely missed out on three years ago.

“If I go out there tomorrow and I hit it the way I normally hit it, and I putt it well,” Casey said, “then I’m fairly confident.”