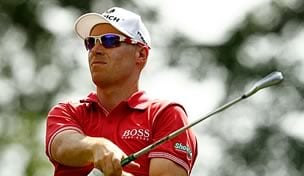 The most-recent edition to the Ben Crane spoof series of online videos, released on Wednesday and dubbed “Slow Life,” featured a little reality mixed amid the comic relief.

While shooting a scene for “Slow Life,” a concept suggested by one of Crane’s followers on Twitter that pokes fun of the Tour player’s well-documented languid pace on the golf course, Crane was being filmed driving too slow on the highway when he spotted a police officer issuing another motorist a ticket.

“He had someone pulled over and I pulled up in front of him and he was kind of upset that I’d stopped,” Crane told GTC late Wednesday from his home in Texas. “But I told him we were filming a video and asked if there was any way he could pretend to pull me over for driving too slow. It was awesome.”

The video, Crane’s sixth and the second of four “Therapy Sessions” editions, already had 9,900 views on YouTube less than 24 hours after being posted. His inaugural video, “On Working Out,” was posted in October 2010 has 1.1 million views.

Crane said he plans to release the other two videos from the “Therapy Sessions” series in the next few weeks along with another music video from the “Golf Boys” – which includes Bubba Watson, Hunter Mahan and Rickie Fowler – probably in early February.

Not that there is any rhyme or reason to Crane’s production moonlighting, which began when he filmed a dance video for a friend’s 50th birthday.

“George Clooney came up to me three times at the party and said, ‘You made this party,’” Crane said of the dance video that has never been made public. “I was like, ‘Is somebody recording this?’ Clooney telling me I made the party.”

Crane said it took about five days to shoot “Slow Life,” although he says it is worth the effort because of the feedback he gets from his growing legion of fans.

“Just because I’ve played slow golf in the past and I love Jesus doesn’t mean I can’t have fun,” Crane said. “If anything I should have more fun. It’s so cool to be playing golf with people and they will ask, ‘Are we playing from the middle of the now?’ What does that mean?”

As for Crane’s day job, he plans to make his first start of the Tour season in two weeks at the Farmers Insurance Open and, after an injury-riddled 2012, said he is as healthy as he has been in some time – both physically and, after filming his four “Therapy Sessions” videos, mentally.

“I was really working through a lot of issues,” he laughed.