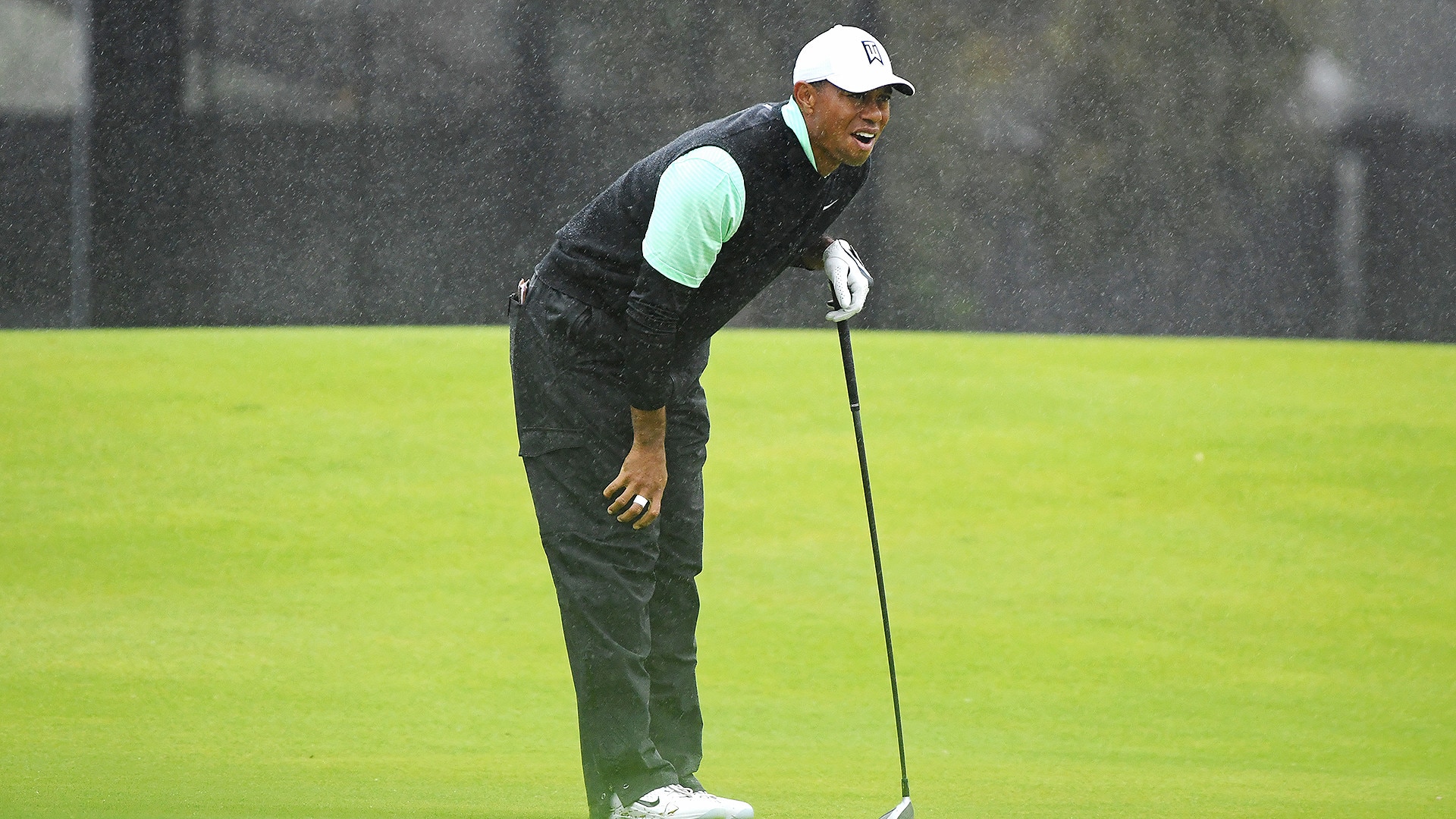 LOS ANGELES – The sun had long set over the canyon at Riviera Country Club and Tiger Woods was putting the finishing touches on a day that began before dawn. Slump shouldered and hands dug deep into wet pockets, he looked 43 years old.

Marathon golf is nothing new to the 14-time major champion, but that doesn’t make it any easier, even if you’ve forged a career making the impossible look improbably easy. Thirty holes into a cold, driving rain had taken a toll and when the horn finally echoed through the canyon at 8:28 p.m. ET, the relief was etched across his face.

“It was a tough day. I'm stiff right now,” Woods said. “It got pretty chilly towards the end, the ball wasn't going very far.”

Torrential rains caused a seven-hour delay on Thursday and Woods didn’t tee off for his first round at the Genesis Open until 8:32 a.m. local time on Friday. Playing in the week’s best conditions thus far, he was 2 over par through seven holes and the event had all the markings of an early exit from his own party. That was until he ripped off four straight birdies around the turn and managed to post a 1-under 71 – despite a historically bad putting effort that included four three-putts.

“I hit it well and putted awful,” was Woods’ succinct assessment of his opening round.

Less than an hour after completing that weather-delayed first round he was back on the clock, grinding his way down wet fairways and through periodic downpours. Woods’ ability to find a fix on the fly is legendary, but on Friday he had no answers.

After starting with a birdie on his first hole of Round 2 (No. 10), the fatigue became evident. Tiger was lucky to escape with bogey at the par-3 16th hole, made par at the normally “gettable” par-5 17th and bogeyed No. 18. He added two more bogeys at Nos. 2 and 3 before darkness brought a merciful end with the event’s host at 1 under par, a single shot inside the cut line.

Friday’s march was both a physical and mental slog for Tiger. Although that’s no different, technically, than it was for any of the other 72-odd players who endured the same grind, for a 40-something with four back procedures it’s particularly noteworthy.

Throughout Woods’ comeback last season, questions about his health were a frequent topic on social media and even after his breakthrough victory at the Tour Championship his performance at the Ryder Cup, both on and off the course, suggested the season had taken a toll. Even Tiger admitted to the understandable wear and tear.

Woods is healthy, but that doesn’t mean he’s been reborn with a Teflon exterior, and days like Friday will always be a challenge. It’s not a criticism, just a fact of aging and injury. 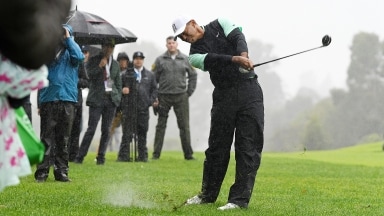 It was cold. It was wet. And it was an all-day affair. Tiger Woods played 30 holes on Friday at the Genesis Open and it was a test.

“My legs are tired, so I just need to go home and rest and get some food and try to go to sleep as early as I can because tomorrow's the potential to be another long day,” said co-leader Justin Thomas, who is 18 years younger and has endured four fewer back surgeries than Tiger.

Riviera can be deceptively long under the best of circumstances, but as waves of rain swept over the layout – it’s called a “Pineapple Express” in meteorological circles – the 7,322-yard course was pushed to the limits, even for the game’s bombers.

For Tiger, who despite his light-hearted claims to the contrary is still among the PGA Tour’s longest hitters [he ranked 32nd on Tour last year in driving distance], the day became an exercise in adjusted expectations.

At the par-4 18th hole, during his second round, Woods’ tee shot travelled just 260 yards up the hill and his 3-wood – yep, 3-wood – approach shot sailed wildly left. Two holes later he was again faced with a fairway wood approach shot from the right rough. The last time he needed to hit fairway wood for his approach shot on a par 4 twice in a round he was likely a skinny teenager growing up in Cypress, Calif.

“It wasn't raining that hard, but it was just spitting enough where it was annoying,” said Woods, who estimated the last time Riviera played this long was in 2007 when the course was soaked by a similar storm. “The temperature kept dropping, wind kept picking up, laying down, picking up, laying down. There's some long holes out there,” Woods said.

Woods hasn’t played this much golf in a single day since Saturday at last year’s Ryder Cup, when he went 29 holes in back-to-back matches in similarly cold and wet conditions. He lost both of those matches and, for the first time in his comeback, appeared worn down.

He had the same appearance on Friday as rain continued to fall and the field scrambled for shelter and warmth. Woods’ return from the quartet of back surgeries is still arguably the most impressive comeback since Ben Hogan, but as these marathon events have shown he’s no longer immune to the impacts of Mother Nature or age.