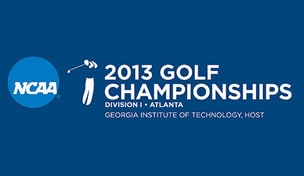 MILTON, Ga. – The NCAA picked a heck of a time to finally take a stand on slow play.

Texas A&M sophomore Ty Dunlap was slapped with a one-stroke penalty Thursday in the third and final round of stroke-play qualifying at the NCAA men's Championship.

That added stroke – assessed after more than a half-hour deliberation in the clubhouse at Capital City Club – dropped the Aggies from sixth place into a four-way tie for eighth at 2-over 842. The top eight teams after Thursday advanced to the match-play portion of the championship, which begins Friday.

Less than an hour later, Texas A&M was the lone team eliminated in a 4-for-3 team playoff with New Mexico, UNLV and Arizona State.

“I feel like they earned a spot in match play,” Aggies coach J.T. Higgins said afterward, “and they got it taken away from them.”

For the first three rounds, the NCAA set up four pace-of-play checkpoints on the Crabapple Course – Nos. 4, 9, 13 and 18. Players had 14 minutes to complete each hole, and 40 seconds to hit a shot when it is their turn to play.

Starting on the back nine, Dunlap and his fellow playing competitors – Arizona State’s Jon Rahm and Central Florida’s Greg Eason – missed their checkpoint on No. 18. They scrambled back into position by the third hole.

They fell behind again, however, after playing the drivable, 320-yard fifth and never recovered. They missed their checkpoint on their last hole, the par-4 ninth, by six minutes.

The NCAA rules committee then had to determine whether all three players would receive a one-stroke penalty or only the players with bad personal times.

Arizona State’s Rahm was absolved of any wrongdoing, keeping the Sun Devils in the playoff (and they ultimately advanced as the No. 8 seed).

Dunlap and Eason, however, were deemed to have not made a sufficient effort to catch up and were docked a stroke. Both players tied for eighth in the individual race, at 5-under 205.

“I think that’s hogwash,” Higgins said. “Yeah, they had some bad times; I’m not arguing with that at all. But I think they made a lot of effort to get back into position.”

Forgotten now will be the late-round heroics from Dunlap, who made bogey on No. 7, holed a 50-footer for birdie on 8, and sank a 40-foot par putt on the final green. Had he missed that putt, the Aggies would have missed the playoff by a shot.

Instead, they still had an opportunity to make match play. The four-team playoff was a shotgun start, with one team member per hole, stretched out over five holes. The three teams with the low four scores advanced, and Texas A&M was the lone team eliminated at 1 over.

In the parking lot after the round, Dunlap said: “We could have made time par, yes, and we didn’t, and that’s all that matters. It just kind of hurts right now. We’re just going to deal with it and come back better next year and make sure we don’t have to rely on being inside the bubble by one or two. It was fully in our control today to shoot a good round and be the No. 2 or 3 seed, and we didn’t do it. Because we didn’t, we’re not going to be in match play.”

It was a crushing disappointment for the Aggies, who have now come within four shots of making match play each of the past four years. Afterward, Cameron Peck, one of the team’s seniors, wrote on Twitter: “Glad I never have to deal with the @NCAA again. Worst organization in sports. Hope you got what you wanted.”

“I don’t think a team has come away more empty-handed than we have,” Higgins said. “It takes a little time after the fact, before it really sets in, the disappointment.”

On Wednesday, UCLA’s Jonathan Garrick was docked a stroke for slow play. It was the first slow-play penalty at NCAAs since 2011.

Asked if he felt like the NCAA was trying to make a statement this week, Higgins replied: “I think so. We need to play faster, there’s no doubt about it. But to not have it enforced all year, and then at your national championship all of a sudden it becomes a major issue? I don’t know what to say.”