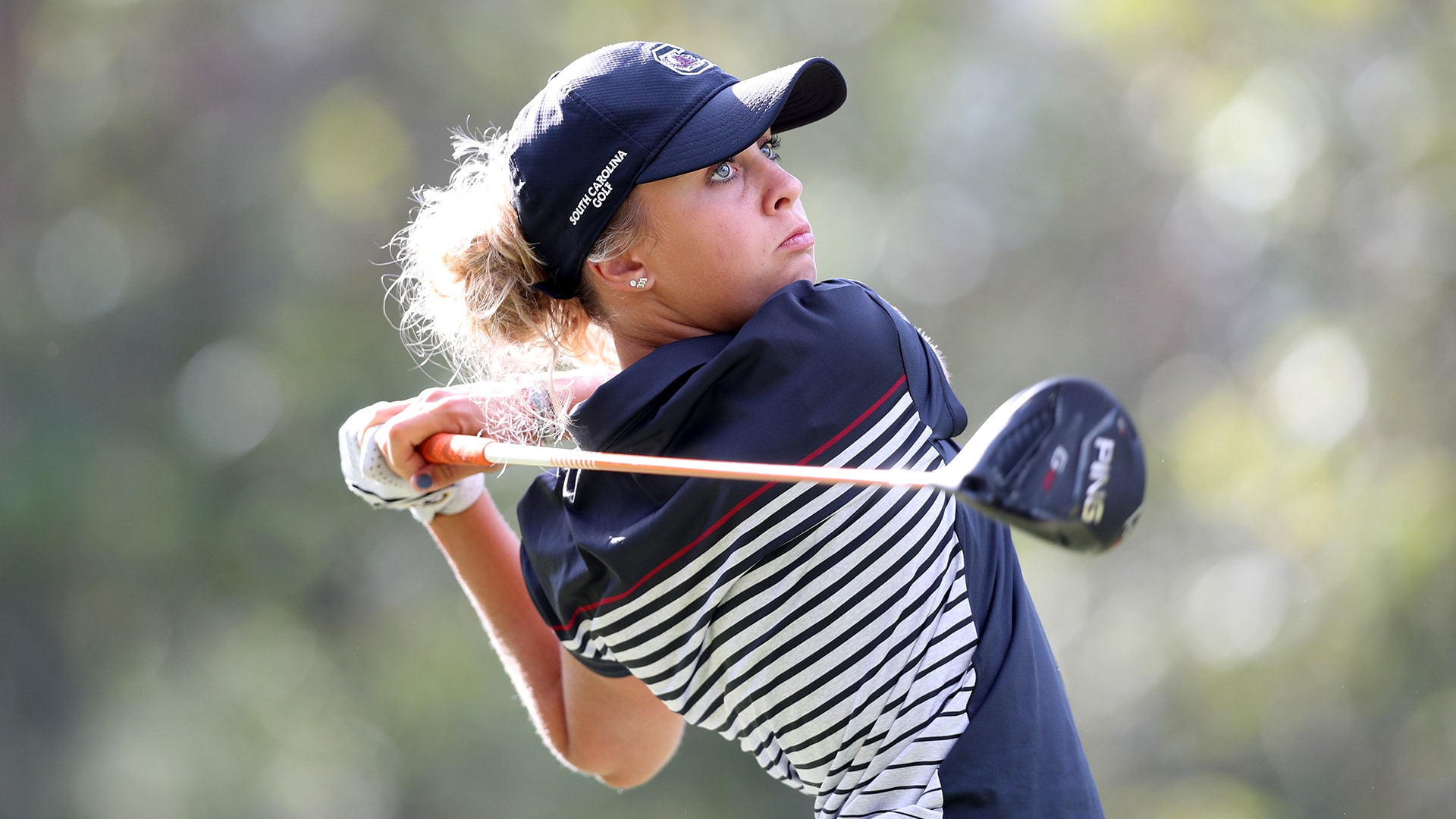 The NCAA Division I women’s golf regionals concluded Wednesday at four sites across the country: University of Louisville Golf Club in Simpsonville, Kentucky; Ohio State University’s Scarlet Course in Columbus, Ohio; Stanford Golf Course in Stanford, California; and the University Club in Baton Rouge, Louisiana, where the NCAA committee had to decide the NCAA Championship qualifiers based on seeding after inclement weather prevented any golf from being played this week.

The top six teams and the top three individuals not on advancing teams in each regional moved on to the NCAA Championship, which begins May 21 at Grayhawk Golf Club in Scottsdale, Arizona.

Here is everything you need to know from the final day of regional play: 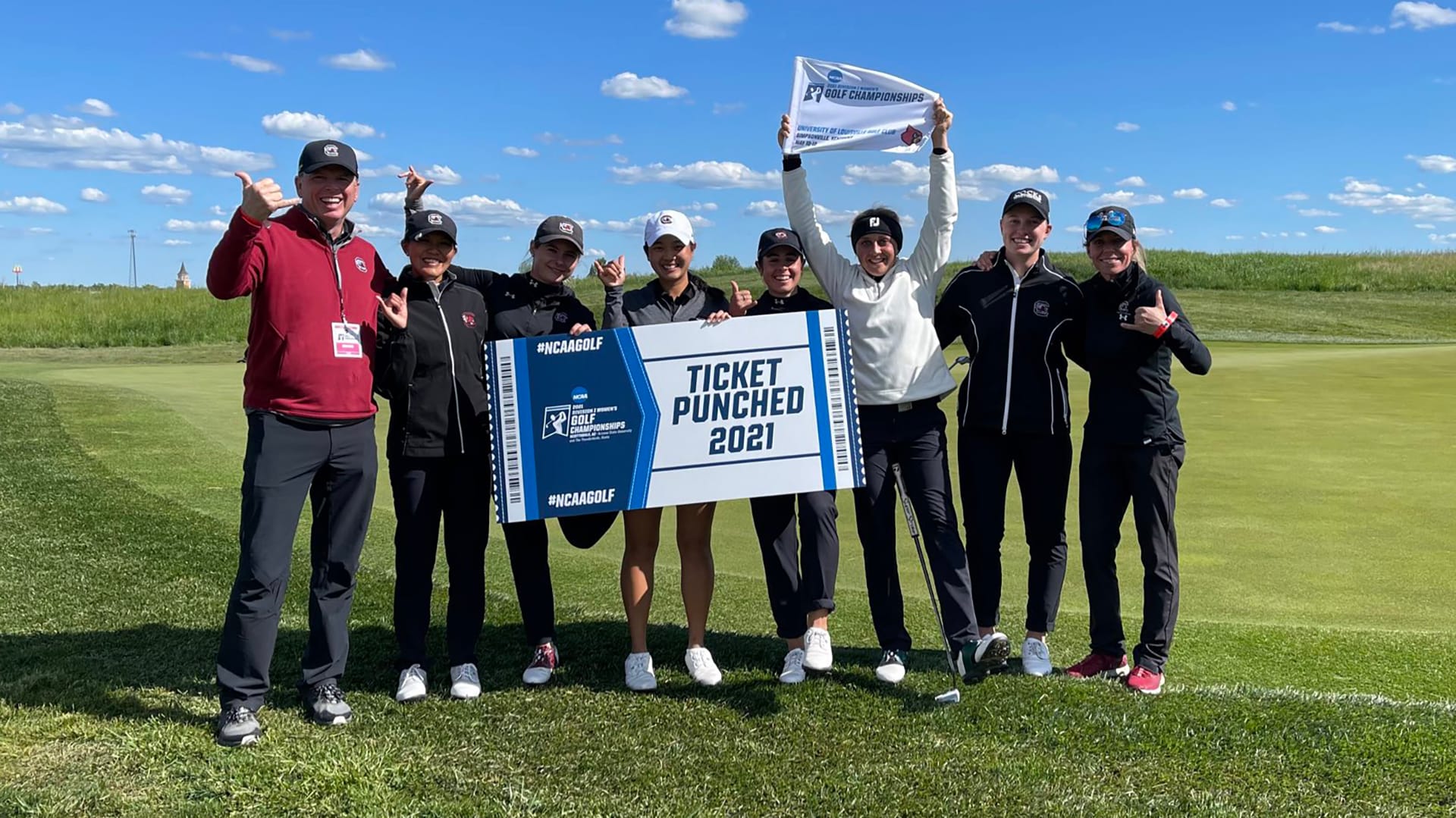 Story of the day: South Carolina entered regionals as the top-ranked team in the nation, but as head coach Kalen Anderson described it, her Gamecocks did not look like it through 54 holes.

“I’m going to be honest, they played really sloppy,” said Anderson, whose squad shot 10 over in Wednesday’s final round, dropping three spots on the leaderboard and into a playoff with Arkansas to determine the final ticket to nationals.

“But I told them before the playoff, I said, I don’t care what’s happened today or before this, all that matters is what happens now and how we react now. We’re lucky to be in a playoff, but we’ve got a chance to change out course right now.”

The Gamecocks answered the bell, combining to make four birdies and an eagle on the playoff hole – the 503-yard, par-4 ninth – to defeat the Razorbacks 6 under to 3 under. The country’s top-ranked individual, sophomore Pauline Roussin-Bouchard, made an 8-footer for eagle in the playoff after a disappointing T-34 showing in which she struggled with her putter and “did a lot of unlike-Pauline things,” according to Anderson.

Ana Pelaez sealed the deal with an up-and-down birdie playing alongside Roussin-Bouchard in the second fivesome.

“When they got to the playoff it was like this laser-focused, unbelievable performance,” Anderson said. “Nobody missed a shot.”

Anderson said despite her team’s struggles in regulation, she believes their playoff performance “sharpened their focus” and “boosted our confidence” entering next week’s NCAA Championship at Grayhawk.

“This definitely got their attention,” Anderson said.

Notable nuggets: Florida State led wire-to-wire to notch the program’s first regional title. “In the beginning of the year, I really didn’t know what we were going to have with two juniors and three freshmen,” Seminoles coach Amy Bond said. “To be where we are in the season, and for them to win a regional for the first time is huge.” Those two juniors, Amelia Williamson and Beatrice Wallin, finished T-2 and T-7, respectively. … Senior Kaitlyn Papp notched her fifth top-10 finish in six starts this season to help Texas to its fifth straight NCAA Championship appearance. … With four sophomores in the lineup, including Spitz, UCLA got the job done. Spitz is the third straight regional medalist for the Bruins, who had Patty Tavatanakit win titles in 2018 and ’19. … For the first time since 2017, Michigan State will advance to nationals. … Auburn senior Kaleigh Telfer eagled her final hole, the par-5 ninth, to cap a 2-under team performance on the final day and help the Tigers avoid the playoff by one shot. Auburn made the semifinals two years ago at the NCAA Championship. … Host Louisville closed in 14 over to drop seven spots on the leaderboard and out of a regional berth. 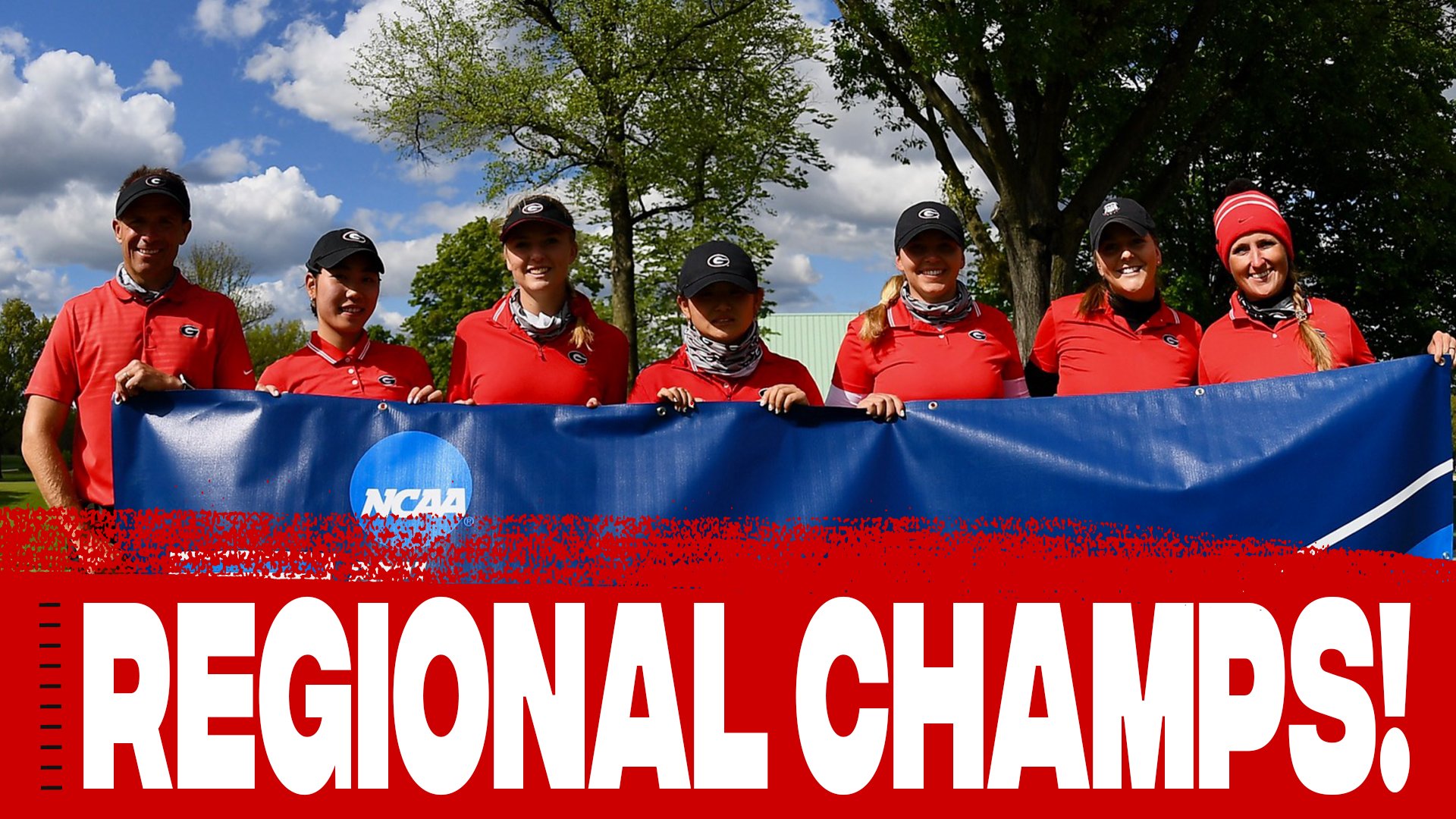 Story of the day: Based on recent form, Georgia winning by 15 shots likely wasn’t on many people’s list of potential outcomes. The Bulldogs were coming off of back-to-back last-place finishes, at the LSU Tiger Classic and SEC Championship, both 14-team fields.

However, Georgia head coach Josh Brewer’s belief in his team remained steadfast. He knew the Bulldogs played those events without some of their key players, including SECs without sophomores Caterina Don and Candice Mahe, and their 64-over combined total between those last two events wasn’t indicative of his team’s ability level when at full strength.

“We think we’re really talented and we just hadn’t been showing it,” Brewer said. “In this sport, you just have to post numbers and the results are who you are, so this win is a great boost for us. We didn’t come here to just qualify; we came up here to win, and to their credit they played really well. Hopefully, we haven’t peaked yet and have a chance next week to do the same thing.”

Don and Mahe returned to the Bulldogs lineup for regionals, with Mahe tying for fifth along with teammate Isabella Holpfer to help Georgia win its fifth regional title in program history, a victory that puts them fourth on the all-time list behind USC, Duke and UCLA.

Junior Jenny Bae closed in 73 on Wednesday, but she still managed to medal at 4 under, three shots clear of three players, including Arizona State’s Linn Grant. She joins a pair of past Bulldogs, Reilley Rankin (1998) and Bailey Tardy (2016), as individual regional champions.

Brewer said Bae has been on a “pitch count” up until about six weeks ago because of an undisclosed injury.

“For the first four tournaments we played this season, she’d show up to practice rounds and that’d be the first round of golf she’d played since the last tournament,” Brewer said. “She showed this week that she should be regarded as one of the best players in our sport.”

Notable nuggets: Duke’s runner-up showing marks the eighth straight year that the Blue Devils have finished fourth or better at regionals. The defending national champions will now turn their focus to Grayhawk, where they will look to win an eighth NCAA crown. … Speaking of Grayhawk, Arizona State will host NCAAs there next week after closing in even par to tie Georgia for low final round. Sophomore Linn Grant led the way with a T-2 finish, her seventh top-5 finish in as many starts this spring. She also has four wins. … Kentucky climbed two spots Wednesday to easily qualify for its first NCAA Championship since 1992. “We want to break glass ceilings,” Kentucky head coach Golda Borst said. “We shattered one today and I'm pumped about that. It's just part of the process of what we are trying to build. We want to be a national championship contender.”  … Michigan is headed to nationals for the first time since 2017, though the Wolverines had failed to qualify for each of the past two regionals. … Kent State joined Michigan in tying for fifth, edging Oklahoma by three shots to qualify for its eighth NCAA Championship in school history though first under head coach Lisa Strom. … Only four top-6 seeds failed to advance among the four regionals, but Virginia, a No. 3 seed, was the lowest seed to fail to get through. 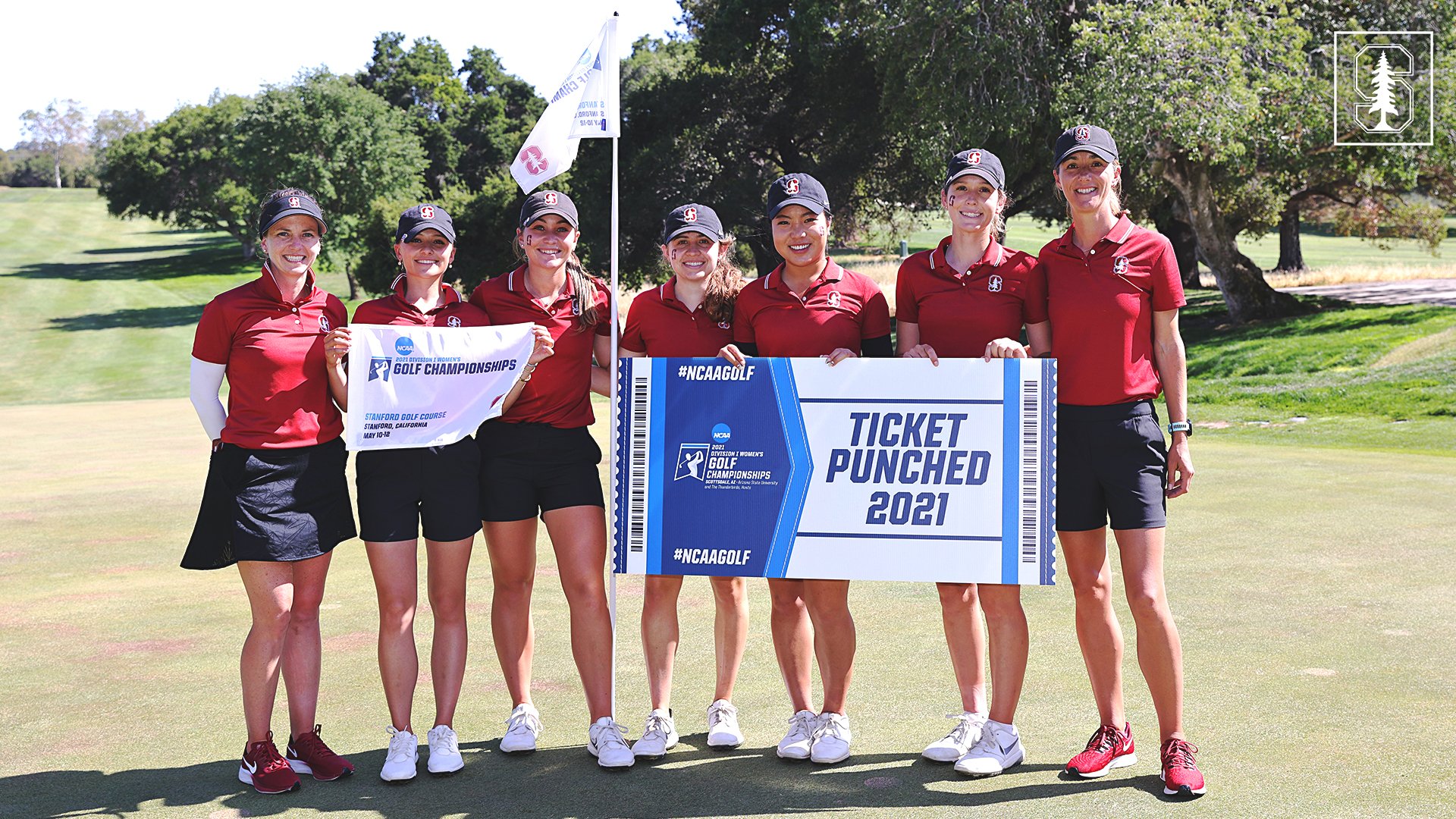 Story of the day: For the fourth straight tournament and fifth time this season, Heck, the heralded freshman from Memphis, captured medalist honors. This time she joined Albane Valenzuela as the only regional champions in program history. Her five victories on the season don’t just put her firmly in the Annika Award mix, they also move her to fourth on the school’s all-time wins list in just eight college starts.

As for the Cardinal, they set their own 18-, 36- and 54-hole regional scoring records as they shot 28 under and won by 30 shots on their home golf course. Stanford now advances to their 11th straight NCAA Championship.

All five Cardinal players finished in the top 15, with sophomore Angelina Ye placing second behind Heck.

Notable nuggets: Senior Emilia Migliaccio tied for sixth to lead Wake Forest to its fifth NCAA Championship in its last six tries and third straight appearance at nationals. It was Migliaccio’s first regional top-10 and just her second top-10 this season. … For the first time since 2016, Oklahoma State is headed to the NCAA Championship. The Cowboys didn’t even make regionals two years ago before head coach Greg Robertson took over before the start of last season. Sophomore Maja Stark’s third-place showing was her fifth top-3 finish of the spring. … Virginia Tech, in its sixth year as a program, punched its first-ever ticket to nationals. … Arizona, the 2018 national champion, shot 5 under, the round of the day, to climb two spots and inside the cut line. Yu-Sang Hou’s 5-under 66 paced the Wildcats in the final round and tied Leta Lindley (1993) for the program’s best regional score. Hou’s 6-under total was a school record. … “It's probably the most clutch putt I've ever made with what was on the line,” said USC senior Amelia Garvey of her 11-foot par save on the final hole to clinch the final NCAA Championship berth for the Trojans by a shot over Florida. Garvey led the way with a T-12 finish as USC struggled to offset a T-70 finish by senior Allisen Corpuz, who hadn’t finished worse than fourth in her first six events of the spring before placing T-15 at Pac-12s. Impressively, USC will now play a 23rd straight NCAA Championship.