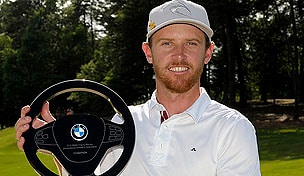 Nick Flanagan took advantage of an incredible break to win the BMW Charity Pro-Am at Thornblade Club in Greer, S.C., on Sunday in a three-hole playoff over fellow Aussie Cameron Percy and likely punched a ticket back to the PGA Tour.

'It's just amazing to be back in contention to be honest with you,' Flanagan said. 'I didn't know if I would ever get back here, but it feels pretty darn good to be sure.'

The 2003 U.S. Amateur winner earned a spot in overtime with Percy thanks to an incredible bounce.

With his approach into the 491-yard finishing hole, Flanagan tried to hit a cut to the pin on the left side of the green. He pulled the shot, however, landing left of the green. The ball bounced once, struck a green-side camera operator and took a turn back and to the right. The ball landed on the green, rolled past the cup and stopped 10 feet away for birdie. Flanagan holed the birdie putt in the heart to reach 15 under par and force the playoff.

Both players made bogey on the first playoff hole, improving by a shot on the second playoff trip around No. 18.

On the third playoff hole, Percy pulled his tee shot left into trees and was forced to pitch out sideways. Flanagan, short with his approach, hit the ensuing bunker shot to two feet to set up the winning par.

The 27-year-old Flanagan earned $108,000 for the win in his second Nationwide Tour event of the year to pierce the top 10 on the tour's money list. The top 25 players at season's end earn playing privileges on the PGA Tour in 2013. It is his second win in this event and fourth Nationwide Tour victory, with the prior three coming in 2007.

Percy's second-place check comes on the losing end of an extraordinary break for the second time in three seasons. Percy, along with Martin Laird, lost in a four-hole playoff for the 2010 Justin Timberlake Shriners Hospitals for Children Open when Jonathan Byrd made an ace in the waning Las Vegas light to win the tournament. 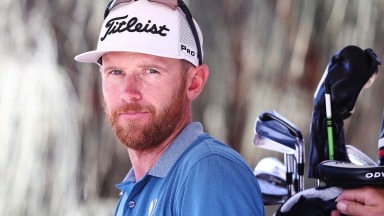 Felicity Johnson and Nick Flanagan lead the Vic Open, where men and women are competing in the co-sanctioned event.