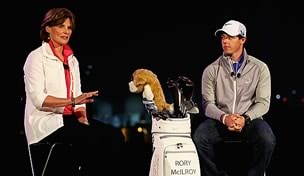 “He’s fully confident. It’s an issue of comfort, and I think in time it will all play out really well.”

McIlroy shot 75-75 to miss the cut in Abu Dhabi in his first start since switching from Titleist to Nike equipment. Interestingly, the Northern Irishman abandoned the Nike Method putter after the opening round, saying the greens at Abu Dhabi Golf Club were slow and that he was having trouble getting the ball to the hole because of the lighter weight of the putter.

During his Nike unveiling earlier in the week, McIlroy was asked specifically if there was a clause in his new contract that would allow him to switch back to his old Scotty Cameron putter. He declined to comment on the contract specifics.

When asked the reaction to Nike’s high-tech introduction of McIlroy, which featured a hologram, laser show and smoke tunnel, Davis said, “Fantastic. What was fun for us was that we had the opportunity to introduce, on a bigger and more global stage, a young athlete who already has had a fairly extraordinary career. We took that moment very seriously and had a young man who has had a passion for our brand ever since he was a kid. It gave us an opportunity to showcase an athlete the way only Nike could.”