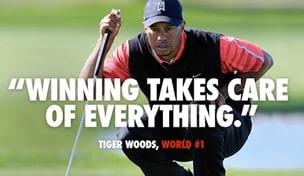 Nike is causing a social media storm with its latest online ad showing a picture of Tiger Woods overlaid with a quote from him, ''Winning takes care of everything.''

The ad, posted on Facebook and Twitter, is supposed to allude to the fact that the Woods recovered from career stumbles to regain his world No. 1 ranking on Monday, which he lost in October 2010. But some say it's inappropriate in light of Woods' past marital woes. It's the latest controversy from the athletic giant who has recently had to cut ties with biker Lance Armstrong and runner Oscar Pistorius because of separate scandals.

Woods has long used the phrase – at least since 2009 – whenever reporters ask him about his or other golfers' rankings.

The ad has garnered more than 8,000 likes and 2,000 shares on Facebook, as well as hundreds of comments, many congratulating Woods on the ranking, but others commenting that the ad sends the wrong message out in light of Woods' past problems. His 5-year marriage to Elin Nordegren collapsed in 2010 after multiple affairs came to light.

Others responded on Twitter. Annie Kessler, 25, in Columbus, Ohio, tweeted that the ad was a ''poor choice'' for Nike. She said in an interview that she felt compelled to tweet because even though she understands why Nike would want to promote Woods, the phrase itself is inappropriate because of Woods' past infidelity.

Nike did not respond to a request for comment.

Allen Adamson, managing director of branding firm Landor Associates in New York, said the ad signals that Nike believes it is time Woods – who in addition to his new No. 1 ranking is now in a much-touted relationship with Olympic ski champion Lindsey Vonn – is back in the spotlight.

''They're looking at this and saying, 'Time has passed, he's winning again, it's time to turn up the volume on our association,' ' he said. ''But it's risky when you associate with a celebrity only based on winning or losing. Consumers care about how you play the game: both the actual game and the game of life.''

Marketing consultant Laura Ries was more positive on the move.

''The reality is what he said is true,'' Ries said. ''Whether or not they should have said it in an ad is another story.''

The ad comes after Nike has had to sever ties with two other high-profile athletes. It dropped Armstrong in October, before Armstrong himself came clean in January, citing insurmountable evidence that he participated in doping and misled the company about those activities for more than a decade. And in February it suspended its contract with Oscar Pistorius, the double amputee runner from South Africa charged with premeditated murder in the Valentine's Day killing of his girlfriend.

Nike never cut ties with Woods when his scandal broke in 2010, and even tried to help resuscitate his image with a black-and-white ad four months later featuring a voice-over by his late father.