Notes: Duval tries to get healthy and revive career 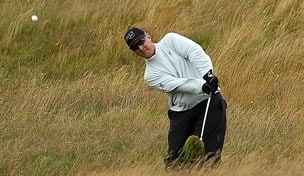 KAPALUA, Hawaii – David Duval spent his first full season of professional golf in the minor leagues, finishing No. 8 on what was then the Nike Tour money list to earn his PGA Tour card. Nearly 20 years later, after a career in which he has won a major, a PGA Tour money title and was No. 1 in the world, Duval is willing to go back.

Duval still doesn't know where he will start his 2013 season, but he figures it will be a year like no other. Duval's only status is as a past champion. His only mission is to start his season next year in Hawaii, whether that's the Hyundai Tournament of Champions or the Sony Open in Hawaii with full status.

''My wife is excited, I'm excited,'' Duval said over the weekend. ''It's going to be a different year with me the way things have changed for exemptions. I've made it clear that this year is about getting healthy and getting status.''

Duval has endured a number of injuries, the latest a broken toe that kept him from going back to Q-School. He did not return until the Father-Son Challenge last month.

Most tournaments have had their unrestricted sponsor exemptions cut in half to two because the Tour is trying to create space for players in a short season.

Duval was disappointed to learn Monday he had been turned down for an exemption to the Humana Challenge, where he delivered one of the most famous moments in tournament history when he shot 59 on the final day to win what was then the Bob Hope Classic. He remains hopeful to get an exemption for Torrey Pines, though he is not standing on the street corner holding out his hat.

His plan is to play – anywhere.

''You don't want to count on charity from other people to play,'' Duval said, referring to PGA Tour exemptions. ''You have to a little, but I'm going to play where I need to play to be in Hawaii next year.''

Meanwhile, Duval is returning to Nike, but he left vague specifics of any deal. He was the first player to win a major using Nike Golf clubs in 2001 at the British Open. ''I will be playing all Nike this year. New covert driver, ball, wedges, etc.'' he said on Twitter.

''I'm going to be with them again,'' Duval said when asked about a deal. ''I haven't signed anything. We've agreed to move forward, is the best way to put it.''

Duval then headed out to practice at home in Denver. He said he has been working all winter, even if that means hitting balls in his garage when it's cold. He even jokingly inquired about the three-sided trailer Steve Stricker uses in Wisconsin.

WORKING VACATION: Most players head to Augusta National in the weeks before the Masters. Brandt Snedeker is planning ahead. He's going to Merion.

Snedeker said he has a friend who is a member at Merion and has been trying to line up a golf trip for some time, so this seemed like a good year with Merion hosting the U.S. Open for the first time since 1981.

''I've just got a trip with some guys, going up there and play, just a way to get up and see the golf course so I'm not shocked when I get to the U.S. Open,'' Snedeker said. ''Merion is not a bomber's paradise. I think they are set up for guys like me who dink it around and keep it in play and don't do anything stupid.''

The plan is to go at the end of March, but it's possible Snedeker might wait until after The Masters. He'll also get in a round at Pine Valley, while in the neighborhood.

''We set it up as a way to go up there and have some fun and also a way for me to get some work done,'' he said. ''So it worked out great. It's a rough trip, but somebody has got to do it.''

PLAYERS AND THEIR PUTTERS: Stricker tried a new putter at the World Challenge last month and said he liked it. But when he arrived at Kapalua, he had the same Odyssey putter he's been using for years. Even the metal tape on the bottom looks old.

The same can't be said of so many other players, some of whom switch putters once a month. Hunter Mahan might not fit into that category, but his story from last year shows how long of a shelf life a winning putter gets.

He switched to a different putter at the Accenture Match Play Championship, beating Rory McIlroy in the final match. And that putter stayed in the bag the rest of the year, right?

''No,'' Mahan said. ''I went to a shorter putter for Houston ... and then won in Houston. So it's kind of funny. I switched putters twice last year – before Match Play and won and then switched putters before Houston and won.''

Maybe he should consider changing putters every week, particularly at the majors.

GWAA AWARDS: Former U.S. Golf Association executive director David Fay has been selected to receive the William D. Richardson Award from the Golf Writers Association of America, which goes to individuals who have consistently made contributions to golf.

Fay spent 32 years at the USGA, the last 21 as the executive director. He is one of the foremost authorities on the Rules of Golf and was in the broadcast booth during the U.S. Open with his wit and bow tie. Fay also was a proponent of making golf more accessible to the public. He was behind the U.S. Open going to public courses (Bethpage Black, Torrey Pines), and years ago, he resigned his membership at all-male Pine Valley when the single-gender courses became a flashpoint for criticism.

The GWAA also voted LPGA star Laura Davies of England for its Jim Murray Award, given to tour players for their relationship and cooperation with the media.

The Ben Hogan Award, given to those who remain active in golf despite a physical handicap or serious illness, went to blind golfer David Meador, who is a three-time National Blind Golf Championship winner. Meador was a freshman at Southern Illinois in 1966 when he lost his eyesight. He is the third blind golfer to win the Hogan Award.

They will join the GWAA players of the year – Rory McIlroy, Stacy Lewis and Roger Chapman – in being honored at the GWAA Awards Dinner April 10 in Augusta, Ga.

DIVOTS: International Sports Management is backing a new tournament for The Big Easy Tour, a feeder program for the Sunshine Tour in South Africa. Chubby Chandler is the head of ISM, whose stable includes South African stars like Charl Schwartzel, Louis Oosthuizen and Branden Grace ... The Tournament of Champions had eight of the top 20 players in the world ranking. But only two of those players – Webb Simpson and Keegan Bradley – signed up for the Sony Open next week in Honolulu. ... Jimmy Roberts, a 13-time Emmy winner with NBC Sports, is starting a monthly series of stories to be called, ''In Play With Jimmy Roberts.''

STAT OF THE WEEK: The previous three winners of the season-opening Tournament of Champions – Stricker, Jonathan Byrd and Geoff Ogilvy – did not win another PGA Tour event the rest of the year.