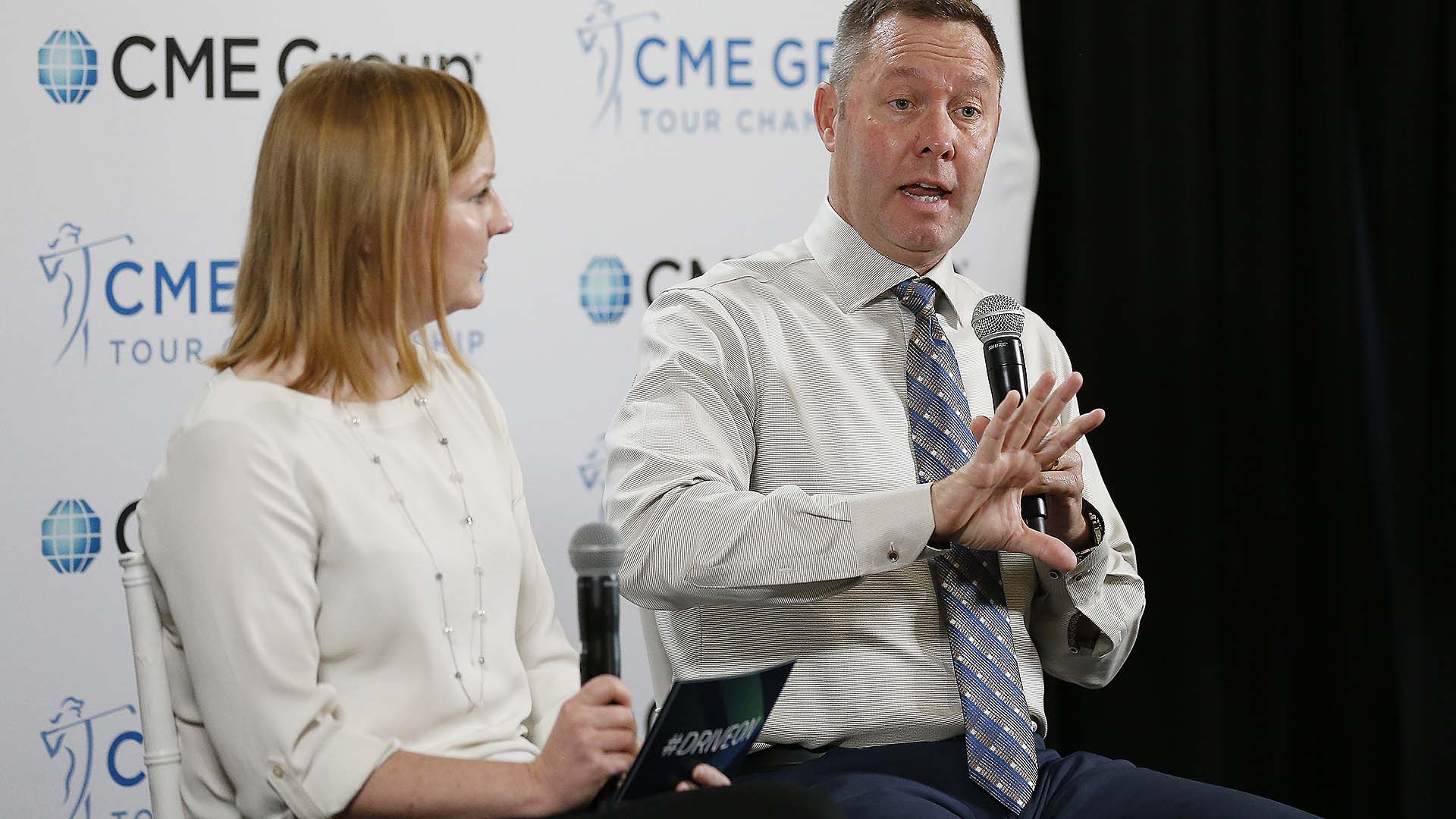 NAPLES, Fla. - Not even commissioner Mike Whan is clear on the length of the contract extension the LPGA Tour gave him.

That's the least of his concerns. Whan says his contract has been structured in such a way that his departure - either leaving or getting fired - is not tied to whatever income is left on the deal.

What drives Whan as he enters the second decade is getting more companies to show support for women in their marketing dollars. In a strong letter to LPGA members announcing his extension last week, he raised the question that if a company's stated values are to provide equal opportunity for women, why wouldn't that be reflected in the marketing and sponsorship money it spends?

''How is it that nearly every company claims equal opportunity is a cornerstone of their business, but 95% of all corporate sports sponsorship dollars are spent on male sports?'' he wrote.

Whan was equally bullish on the weekend of the CME Globe Tour Championship, which offered $5 million in prize money with a record $1.5 million for the winner.

The new mantra: Live your values.

''That doesn't mean everybody is going to agree with me,'' he said. ''In fact, I can tell you that 95% of the companies disagree with me, evidently. But I do think it's coming. ... There's investors that will only invest now in companies that have these kind of values reflected in everything they do. When money stops flowing to you because you're not walking the talk, the world is going to change.''

The LPGA tour will have a 33-tournament schedule this year with a record $75.1 million in prize money. The PGA Tour offered $81.75 in just its nine tournaments in the fall. For the season, the total purse is $374.7 million for 48 official events, not including the $15 million bonus for the Tour Championship.

The European Tour has 44 tournaments with total prize money of just over $200 million.

Brad Faxon has golf fans he doesn't even know, including the best player in women's golf this year. Jin Young Ko was asked before the LPGA finale if she had a favorite player who was not South Korean, because Se Ri Pak was a role model for so many.

And yes, it's all about the putting.

Ko, perhaps not surprisingly, is among the best on the LPGA tour with the short stick. She said she watched YouTube video of Faxon's putting from age 15 to about 19. That was before she had a coach. Ko now works with Gareth Raflewski, who has revamped her entire short game as Ko reached No. 1 in the world.

And maybe there's another reason she won't give Faxon a call about putting.

''I think he a little expensive,'' she said with a laugh.

Lanto Griffin had a dream start to his second season until he was running on fumes and missed more than just his only cut of the season at Sea Island.

The Houston Open champion, who finished in the top 20 in his first six tournaments, opened with a 74 and rallied with a 65. He missed the cut by one shot. That cost him the final two rounds in the ''RSM Birdies for Love'' competition, which awards $300,000 toward a charity of the player who has the most sub-par holes in the fall.

''I was disappointed,'' Griffin said before leaving Sea Island. ''But like I said, I'm tired and I battled as far as I could, so I've got nothing to hang my head about. Just cross my fingers and hope.''

No such luck. Scottie Scheffler shot 63 on Saturday to pull within one birdie, and then ran off four on the back nine to beat Griffin by one.

It wasn't a total loss for Griffin. Second place paid $150,000, which he plans to use to start a foundation and help out in the southwest Virginia area where he was raised.