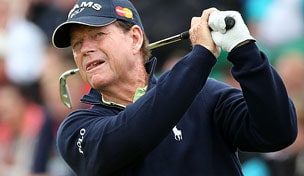 SAN DIEGO - Tiger Woods and Tom Watson are both Stanford alums and have won player of the year multiple times on the PGA Tour. They have never been particularly close, though they have a long history that dates to when Woods was still in elementary school.

That mainly involves Watson's caddie, though.

Woods was talking Tuesday about how his father took him to PGA Tour events when he was a kid, to Torrey Pines and Riviera, when he recalled a moment with Watson at Riviera in 1985. Watson's caddie was the late Bruce Edwards, who died of Lou Gehrig's disease.

''So No. 8, Tom snipes it to the left off the tee, and I'm right there,'' Woods said. ''He hits it again, left of the green - pin was back left. I'm up there ... He basically yelled at me saying, 'I moved you out of here once,' and basically moved me out of there twice. I just wanted to see, you know? Tom Watson. He sniped one, and sniped another one, and I happened to be right there on both of those shots. And Bruce let me know about it.''

Many years later, is it safe to assume that some young fan watching Woods might have gone through the same experience?

HISTORY MAKER?: Geoff Ogilvy of Australia has a chance to be a small part of history on the PGA Tour, even if he thinks history is against him.

Ogilvy is among five players on this year's 16-member Player Advisory Council who has been nominated to be a chairman of the PAC. The chairman serves one year before he is elevated to player director on the PGA Tour's policy board.

There has never been an international player serve on the board.

''I don't think I'll get voted in because I'm an international player,'' Ogilvy said Tuesday. ''I guess there's more international players every year. I think their position - the current board and Ponte Vedra, if you like - think if the Tour is 25 percent international players, maybe of the four player directors there might should be one that's an Americanized international. You can't just bring someone from another country and put them on the board. But once you've been on Tour for a certain amount of time, you get a feel for it.''

Roughly one-third of the Tour now consists of international players.

Steve Stricker and Paul Goydos are in their final year on the board, so there will be two chairmen elected from the PAC. The other four candidates are Joe Ogilvie, Mark Wilson, Bo Van Pelt and Jason Bohn.

Ogilvy is respected among his peers for his clarity and his insightful thoughts on the game, particularly his outlook on golf course architecture and how courses are set up. He has served on the PAC a few times before, without any interest in being a chairman.

''It would be interesting to be on the board. This is an interesting time for the Tour,'' Ogilvy said. ''I'm not inclined that way, but I am interest in the operations of the tour.''

The former U.S. Open champion, who also has three World Golf Championships to his credit, is not about to campaign for votes.

He's not even sure what players want in a chairman and future board member.

''I would have said at least 50 percent of the players don't mind who the board members are and really don't care about the operating of events. As long as they get $6 million to play for 30 times a year, they're happy - and they like the way the courses are set up. That's pretty much the interest of half the tour. They don't go much further than that. They vote for their friends, I would think. That's how politics work in general, isn't it?''

CLINTON'S LESSON: Tom Watson gave former President Bill Clinton the best advice he ever received in golf - and perhaps in politics, too.

Clinton last week at the Humana Challenge recalled the time he was in office and hosted the 1993 U.S. Ryder Cup team, when Watson was the captain and the Americans last won on European soil.

Watson asked the president to grip a club, and immediately told Clinton that he was gripping it too tightly, a common mistake of average golfers. Watson showed him the proper grip, and Clinton was able to take the club out of his hands.

Then, Watson asked to see the grip again and focused on the position of his hands. And then came the lesson.

As the laughter subsided, Clinton finished the lesson.

''The trick is for your grip to be just right,'' he said. ''Worth remembering these days.''

MASTERS RETIREMENT: Jim Armstrong was working for an accounting firm that had Augusta National Golf Club as one of its clients. Clifford Roberts was the chairman at the time, meaning that by extension, Armstrong will end his career having worked with every chairman at the home of The Masters.

Roberts died the year before Armstrong went to work for the club in 1978, and a year later, he became the director.

After serving directly under the last five chairmen - William Lane, Hord Hardin, Jack Stephens, Hootie Johnson and Billy Payne - Armstrong is retiring this year after 35 years as what amounts to the highest-ranking person at the club who is not a member.

''Jim Armstrong has given Augusta National Golf Club more than three decades of exceptional vision, impressive leadership and outstanding service as our executive director,'' Payne said. ''Jim has certainly earned and deserves his retirement. As a consequence of his longtime commitment, he is leaving a permanent and positive impression upon the legacy of Augusta National, its membership and the Masters.''

Will Jones was appointed to the new executive director. Jones has worked under Armstrong since 1993 and currently is senior director of business affairs.

''My career at Augusta National Golf Club has been one of remarkable good fortune, and my affection for this wonderful place is immeasurable,'' Armstrong said. ''It is nearly impossible to put into words the privilege I have experienced in serving the club.''

DIVOTS: This will be the final year the U.S. team for the Presidents Cup is decided by PGA Tour earnings. The 2015 team will be determined by FedEx Cup points. ... LPGA commissioner Mike Whan takes over for USGA executive director Mike Davis has chairman of the World Golf Foundation for 2013. ... Kevin Sutherland, who missed most of last year with a neck injury, was planning to return at the Humana Challenge until his back went out on him while putting on a pair of gym shorts. He plans to play next week in the Phoenix Open.

FINAL WORD: ''Any time Tiger has a record, I put an asterisk by it, because it's Tiger's record. It's not normal. It's not the way it's normally going to be for most people.'' - Brandt Snedeker.