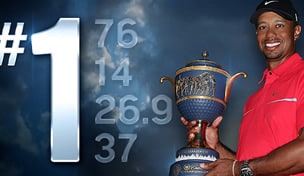 The following is a question I received during a radio interview in advance of this past week’s WGC-Cadillac Championship:

I somehow muddled my way through a (hopefully) coherent response after being caught completely off guard at the insinuation that something was indeed wrong with Woods. Sure, he had finished T-37 at the Honda Classic just a few days earlier, which is obviously well below his standards. And yes, he lost in the opening round of the WGC-Accenture Match Play Championship one week earlier; though in his defense, he didn’t make a single bogey against a red-hot Charles Howell III.

In his previous start, however, Woods won the Farmers Insurance Open in runaway fashion, playing his patented prevent defense in the final round for a triumph that was less dramatic than methodical.

That gave him one victory in three PGA Tour appearances this season, a 33.3 percent clip that even exceeds his career number of 26.5 percent as a professional entering the year.

If that stat sounds too amazing to be true, try this one on for size: Through four starts so far this season, that number has actually improved to a 26.9 percent win rate.

At the new House of Trump, he triumphed in much the same way again, parlaying a four-stroke 54-hole lead into a two-stroke victory that was really never in doubt. When weekend playing competitor Graeme McDowell was asked after the final round about chasing Woods, he admitted, 'The last time I thought I had a chance to catch him was probably (Saturday).'

End result? I don’t think I’ll be hearing that aforementioned question again anytime soon. While we’re at it, maybe we can finally stop with the incessantly annoying, “Is Tiger back?” queries, too.

He’s now won more PGA Tour titles than any other player since the beginning of last season. If he’s not back, then no one else is, either.

In fact, if we’re to analyze Woods’ recent accomplishments, there’s a lot more positive spin to place on them than those of the negative variety.

There are some who believe Tiger will never be considered the greatest player of all-time until the day he passes Jack Nicklaus’ record of 18 career major championship titles. I include myself in that group, largely based on the reason that Woods includes himself in that group, as well.

Ask him about non-majors and he’ll contend that while winning clearly beats the alternative, his main intention is to have his game peak four times per year.

That said, if we use Woods’ 76th career PGA Tour win as an occasion to compare and contrast with the exploits of Nicklaus in all events, as opposed to just majors, it isn’t a fair fight. As already mentioned, Woods owns a 26.9 percent win rate as a professional. Nicklaus finished with a career percentage of 12.7, which although brilliant in its own right, looks paltry by comparison. Include only the years through his 37th birthday – Woods’ age right now – and the number is a much more impressive 19.9 percent, though it’s still a far cry from the only man in modern history who owns a better number.

It’s not as if Woods has played a lot fewer events, either; the insinuation being that cherry-picking his schedule would aid his overall percentage. Tiger competed in an average of 18.1 tournaments for the first 15 full seasons of his professional career, though that number includes campaigns limited due to injury, his father’s death and much publicized personal strife. Nicklaus, meanwhile, played just two more events each season, tallying an average of 20.2 for his first 15 seasons while never reaching 20 after 1970, the year he turned 30.

Toss in the fact that the majority of Woods’ starts come against only the most elite global competition and his historic number keeps sounding all the more impressive.

Now, it’s perfectly acceptable to claim that Woods’ full body of PGA Tour work be compared not with Nicklaus, but Sam Snead, the only man who owns a higher career victory total. Fair enough.

That doesn’t mean, though, that Woods will appear any less dominant. Here’s the only statistic you need to know for this comparison: Snead won his 76th career title the same week he turned 46 years old. Tiger was 37 years, 2 months and 10 days on Sunday, which means he could fail to win another tournament through the end of the 2021 season and still remain ahead of Slammin’ Sam’s victory pace.

In fact, Woods isn’t far from Snead’s individual total right now. Those 82 wins included five team victories – two apiece with Ralph Guldahl and Jim Ferrier; one with Vic Ghezzi. Remove them and Snead is mired at a mere 77, placing him just one ahead of Woods in tournament titles without a partner.

Keep all of this info in mind the next time someone asks, “What’s wrong with Tiger?” Every Sunday afternoon isn’t going to be a triumphant coronation, just like 73.1 percent of his previous Sunday afternoons on Tour.

Just because Woods doesn’t win isn’t reason for claiming that something is “wrong” with his game. If he proved anything on this particular Sunday afternoon, it’s that right now, something is very right.