By the numbers: The stats that shaped golf in 2018 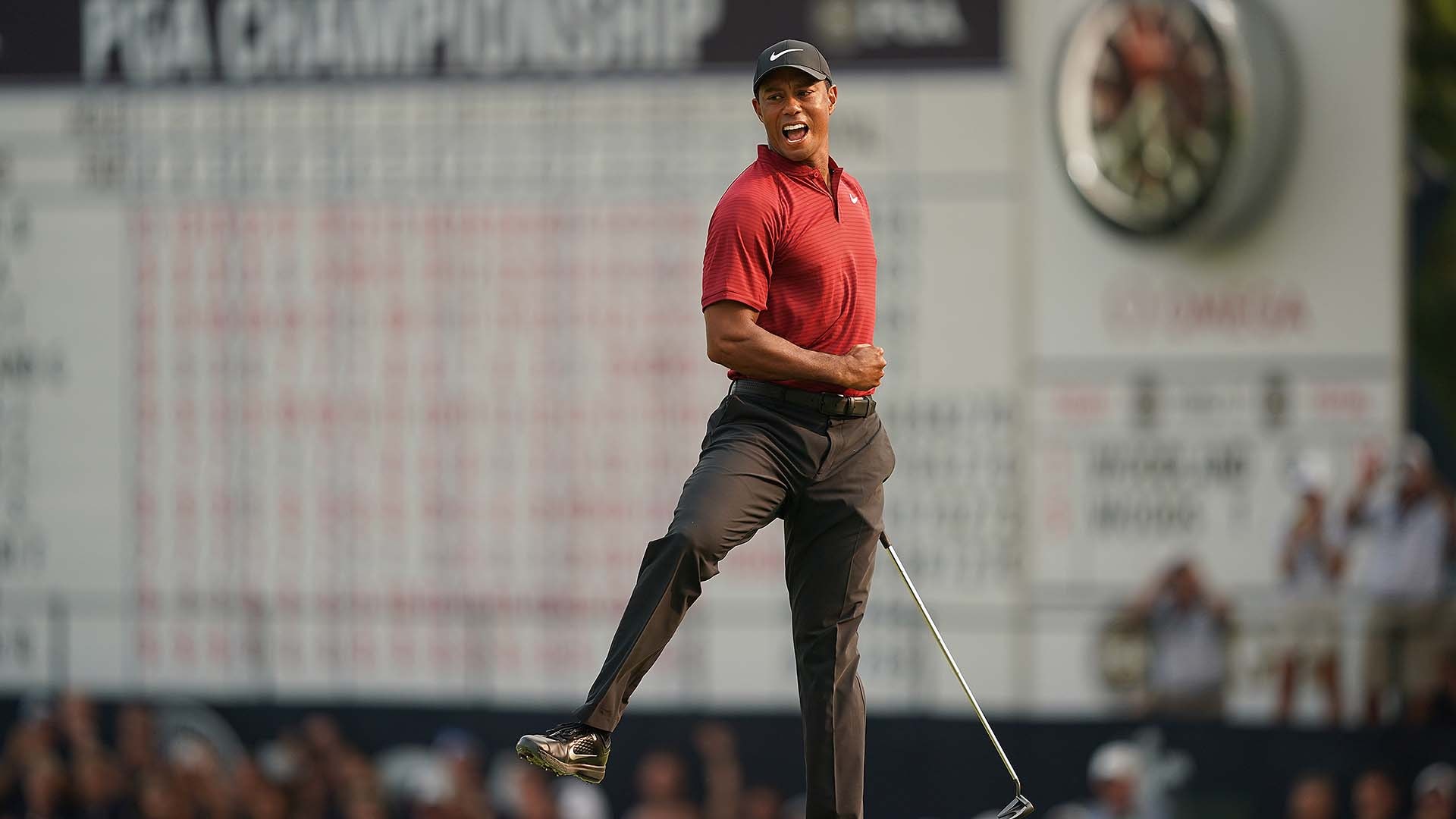 History is measured in different ways.

Images, like Tiger Woods saluting the St. Louis crowds from a walkway above Bellerive, will live forever.

Moments, like Tommy Fleetwood celebrating with elated fans in Paris, shape our memories.

And statistics, at best, provide context for the achievements we cheer for. These are the best stats of 2018.

The third round of the Masters saw three young superstars - Jon Rahm, Rickie Fowler, and Rory McIlroy shoot 65. It was the first time in Masters history that three or more players shot 65 or lower in the same round.

Jordan Spieth’s performance the following day nearly made them an afterthought. Spieth was nine shots back entering the final round, but in the blink of an eye he was 9 under with two to play. He had a 62 – and another green jacket – inexplicably within reach. A bogey at 18 derailed those dreams, but Spieth became the first player in Masters history to finish third or better four times in his first five career starts.

Pink-clad Patrick Reed donned the green jacket, becoming the first to win the Masters the year after missing the cut since Tiger Woods in 1997. It was the first time Americans captured the top-three spots in the Masters since Woods, Duval and Mickelson in 2001.

FINAU SO CLOSE, SO OFTEN

By virtually every measure, it was a landmark year for Tony Finau. He had top-10 finishes in each of the first three majors. His eleven top-10s in the 2017-18 PGA Tour season trailed only Dustin Johnson.  And in December, he moved into the top-10 in the Official World Golf Ranking for the first time in his career.

The Players is one of the least predictable tournaments in golf. There has never been a back-to-back winner, no player has ever won the event at TPC Sawgrass more than twice, and the world ranking of the last five winners has run the numerical gamut (61, 13, 1, 75. 41).

So it’s not that Webb Simpson won that’s shocking, but how he did it. In the 2015-16 season, only eight players had a worse strokes-gained putting average per round than Simpson. That translated to 84th in the FedExCup standings that year, despite being fifth on Tour in strokes-gained approach.

In Stillwater, the Arizona women won their third national championship, becoming the sixth program in Division I women’s golf to win three or more NCAA team titles. The Pac-12 has dominated the last four years of NCAA Championship match play: the conference has produced 50 percent of the 32 teams to reach match play, five of the eight finalists, and all four champions – from four different schools (Stanford, Washington, Arizona State, Arizona).

The Cowboys capped off their season in storybook style, sweeping Alabama 5-0 in the final in front of their home crowd. For Oklahoma State, it marked the first time that a Division I team won 10 tournaments including the NCAA Championship since the 1977 Houston Cougars.

Pernilla Lindberg and Inbee Park needed eight playoff holes (and another night’s sleep) to decide the ANA Inspiration. It was the longest sudden-death playoff in LPGA major championship history, and the third-longest in any LPGA event overall.

He’s not No. 1 in the world, but Dustin Johnson was first on the PGA Tour in an array of categories last season. These statistics include, but are not limited to: strokes-gained total, strokes gained off the tee, strokes gained tee to green, scoring average, birdie average, rough proximity, bounce-back percentage and average distance on all drives.

Speaking of DJ, his 81 weeks as the world’s No. 1 player are second-most all-time among Americans, trailing only Tiger. DJ was one of four different players to hold the top spot in 2018, tying the most in a year in the Ranking’s history. In 1997, Ernie Els, Greg Norman, Tom Lehman and Woods held the top spot. The nine changes atop the world rankings this year (at the time of this publication) are the most since the rankings began in 1986.

Rory McIlroy averaged 319.8 yards off the tee in ’17-18, the best on the PGA Tour and the second-highest single season average in PGA Tour history. Cameron Champ then asked Rory if he was using his 3-wood (probably).

Champ averaged a ridiculous 343.1 yards during the 2018 Web.com Tour season, the highest total in that tour’s history by about four yards. Champ proceeded to rack up 15 sub-70 rounds on the PGA Tour’s fall stretch, tied for most of any player.

Meanwhile, Henrik Stenson led the PGA Tour in both driving accuracy and greens in regulation, becoming the first player to do that since Calvin Peete did it in three straight seasons, from 1981-83.

Through 36 holes at Shinnecock, DJ looked like a Tyson-against-Douglas-style lock to win his second U.S. Open. After all, the only player to lead the U.S. Open by four or more shots after 36 holes and not win was Tom McNamara in 1908. But Johnson’s putter went ice cold after Friday – after registering only 53 putts through two rounds, he hit 73 putts on the weekend and finished third.

Fleetwood flirted with immortality four-and-a-half decades after Johnny Miller achieved it. Tommy shot 63 on Sunday, becoming the second player in U.S. Open history to shoot 63 in the final round. Miller did it on June 17, 1963 – 45 years to the day before Fleetwood.

From 2012-17, The Open champion averaged a world ranking of 14.5 and an age of 35.3. The 15th-ranked player in the world heading to Carnoustie happened to be Francesco Molinari, age 35.

To put into perspective how impressive Brooks Koepka was at Bellerive, one only needs to look at what the man he defeated accomplished that week.

Tiger needed just 130 strokes to finish the last two rounds, his lowest closing 36-hole stretch in a major by three shots. At 266, Woods recorded the lowest total in major championship history by a non-winner, joining Phil Mickelson at the 2001 PGA Championship. Even further: Tiger never shot a total score lower than 269 in any of his 14 major victories.

Koepka, the archetype player forged by the Woods era, stared down the legend’s best, and beat it.

He became the fifth player in history to win the U.S. Open and PGA Championship in the same season, joining Sarazen, Hogan, Nicklaus and Woods. His total score of 264 tied the lowest by a major champion in history (matching Stenson at the 2016 Open). He became just the fifth American player since World War II to win three majors at age 28 or younger, joining Jack, Tiger, Jordan Spieth and Tom Watson.

A FIRST FOR THE EUROPEAN TOUR

On September 20 in Portugal, Oliver Fisher became the first player in European Tour history to shoot 59. It took 46 years and nearly 700,000 rounds around the world for the first sub-60 score on that circuit.

The U.S. Ryder Cup team headed to Paris with an average world ranking of 11.2, the best of any team since the rankings began in 1986. Unfortunately for the Americans, their top players didn’t live up to the billing, while Europe’s did.

There were four back surgeries, 47 multiple PGA Tour winners and nearly 1,900 days between victories, but Tiger’s title at East Lake was more of a climb completion than sudden leap.

He led the field in proximity at Honda, before contending at Innisbrook and Bay Hill. Saturday at TPC Sawgrass, he shot 65, his lowest career round in The Players Championship.

Woods led by three strokes after 54 holes at East Lake. With his win, he stayed perfect in those situations in his career: 24-for-24. Tiger finished the season ranked third in strokes-gained approach, fifth in strokes-gained total and seventh in scoring average. He played 19 times around the world (without a single withdrawal), his highest total since 2013. The Tour Championship became the fifth different PGA Tour event he has won in the 1990s, 2000s and 2010s.

In 2019, Woods begins the re-energized chase for 19 majors. No player has won more than two majors in the modern era after turning 43, however, making his chase of 83 PGA Tour wins a more palatable pursuit. Sam Snead won his 81st tournament at age 48, and got his final victory in 1965 at age 52. Woods turns 43 on December 30.