By the numbers: Why Garcia, Leishman may be in trouble 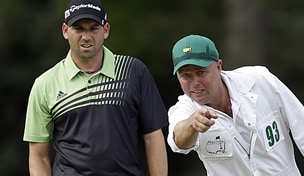 The first round of the season's first major is now in the books. Here are some stats and trends to keep in mind heading into Friday's action at Augusta National, supplied by the Golf Channel Research Unit:

• Amid benign conditions, 33 of the 93 players in this week's field were able to break par in their opening round. That marks the fourth-highest total of sub-par Thursday rounds in Masters history; the only other times Augusta yielded more low scores during the first round were: 1992 (35), 1993 (34) and 2009 (38).

• The pool of players with a realistic shot to win the green jacket may be limited to the 33 men that bettered par on Thursday. Each of the last seven Masters champions have broken par in their opening rounds, with each of the last five winners breaking 70. The last time a player shot over par Thursday and went onto win was 2005, when Tiger Woods claimed his fourth green jacket despite opening with a 2-over 74.

• While Sergio Garcia and Marc Leishman are pleased with their opening 66s, the numbers indicate they are not likely to don the green jacket come Sunday. Before this week, there were 31 instances where a player shot 66 or better in the opening round; only five times did one of those early risers go on to win the event. The last player to do so was Seve Ballesteros, who won his first green jacket in 1980 after starting with a 6-under 66. Of the 19 players to open with 66 since 1990, only five have gone on to record top-five finishes.

• With a 1-under 71 Thursday, Bernhard Langer continued to bolster his strong record at the Masters, as it marked the 15th time the German has broken par in the first round at Augusta National. He is now tied with another two-time champ, Tom Watson, for the most sub-par opening rounds among active participants; though, Fred Couples (14), Phil Mickelson (14) and Tiger Woods (13) are hot on their heels, having all broken par Thursday as well. Not surprisingly, Jack Nicklaus holds the all-time record with 26 opening rounds below par.

• Having opened with a 4-under 68 Thursday, David Lynn is well on his way to making his first Masters appearance a memorable one. The Englishman is the 23rd player to shoot 68 or better in his debut round at Augusta National, though only four other players have accomplished the feat since 2000. The last to shoot 68 in his first competitive round at the Masters was another Brit, Luke Donald, who did so in 2005.