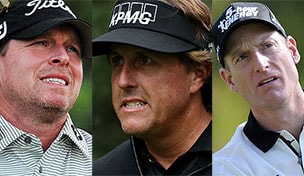 Dustin Johnson made the stage all his own Tuesday winning the Hyundai Tournament of Champions.

While Steve Stricker gave a gritty effort, battling through pain in his right leg, we saw more evidence of the changing of the guard in the game.

We saw youth continue to step over their elders on their way to the top of another leaderboard.

Woods, thanks to his three victories last season, remains the top American in the world rankings, but the supporting cast, the next level of American strength, is rapidly changing.

Stricker’s limp around Kapalua was as symbolic as it was real.

For a long spell, Phil Mickelson and Jim Furyk joined Stricker as America’s “next best” behind Woods.

That’s no longer the case, and the jockeying for position to replace them is intriguing with no shortage of young American challengers on the rise.

Mickelson, Furyk and Stricker enter a year where it feels like they’re on the clock.

At 45, Stricker, the oldest, is hastening his exodus from the game’s top ranks with his announcement that he’s drastically cutting back his schedule, to as few as 10 events this year. While there’s nobility in his reasons, in wanting to devote himself more fully to family, there’s inevitability, too. There’s his inevitable fade. He’s stepping back, and that precedes stepping away.

Mickelson will play one more major before turning 43 this summer.

Nobody’s won a major after turning 43 in 18 years, since Ben Crenshaw won The Masters in 1995.

That’s not to say Mickelson’s washed up. He won just last year. He has won in each of the last nine seasons, including the Masters in 2010, but time’s ticking more swiftly for him now.

Just as it with Jim Furyk, who also has one major to play before turning 43.

Mickelson barely qualified for the American Ryder Cup team on points last season. Stricker and Furyk did not qualify and made the team as captain’s picks.

Mickelson has slipped from No. 2 in the world rankings just two years ago to No. 19 today.

Hey, Mickelson nearly won the Masters last year, Furyk the U.S. Open. If they were to bounce back and win majors this year, they would script some terrific stories, but there’s a legion of young Americans who are working hard to take those prizes instead.