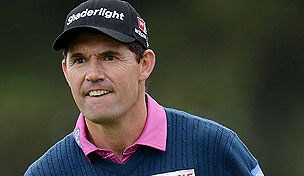 Getty Images
DOHA, QATAR - JANUARY 23: Danny Willett of England pictured in a pratice bunker after his second round of the Commercialbank Qatar Masters at the Doha Golf Club on January 23,2009 in Doha, Qatar. (Photo by Ross Kinnaird/Getty Images)  -

SCOTTSDALE, Ariz. – Padraig Harrington stands on the end of the driving range beating golf ball after golf ball into a fading late-afternoon sky. The range is located adjacent to the first tee at TPC-Scottsdale, home of this week’s Waste Management Phoenix Open, but it could be anywhere for a global golfer who has been there and done that.

Another city, another course, another week.

Except … it’s not. This one is different.

Which is the reason why this one is different. The three-time major champion can usually be found competing in Dubai this week, or maybe getting ready for his regular two-event West Coast Swing at Pebble Beach and Riviera.

Instead, he’s here in Scottsdale, taking part in this event for the first time. The man who maintains there are too many great tournaments to play every year has found yet another one to add to his list.

“I really have watched this tournament on TV, and I really appreciate what they've done here, and I feel like it was always an event I wanted to come and see and play myself,” Harrington explained. “I'm a great believer that we have a lot of golf tournaments and a lot of golf tournaments that try and hold them out to be something, and it's nice to have variation. It's nice to come here and [see how] very much they celebrate the spectators this week.”

If that sounds like a refreshingly unique attitude, it should. At 41 years old, Harrington is at the point in his career where he should be dropping events from his schedule, not adding them. Well, that’s at least the strategy from many of his peers, those of whom are so set in their ways that they’d rather schedule another root canal every year than another tournament.

Of course, Harrington has never been one to go along with the crowd. He’s a constant tinkerer, a fact that is literally written across his face this week. In the offseason, he decided his eyesight needed some work, so despite 20/20 vision he showed up here wearing prescription eyeglasses.

There will undoubtedly be plenty to see. This event annually draws more than 500,000 fans behind the gallery ropes, making it the biggest party in golf. For a self-proclaimed teetotaler, Harrington will be able to do some first-class people-watching.

“It's a great thing when you see golf tournaments that get a little niche,” he said. “It's very important in this day that all the golf tournaments can't be the same, and it's important that each tournament has to find a little niche in the market to try to strive themselves different. Obviously the Waste Management Phoenix Open has done that with their spectators. They created a completely unique event in golf, and that's a great thing. So that's why I'm here, because of that.”

That alone should be enough to ingratiate Harrington with these fans. While many players are serenaded with a chorus of jeers for poor shots – or even more often, no reaction at all for any shots, with the tournament hardly providing distraction from the party atmosphere – the willingness of a world-class player to add this event to his schedule for the sole purpose of checking it out should sit well with observers.

And if it doesn’t, just wait until he tries to pull off the improbable – a hole-in-one at the famed 16th hole in front of 15,000 screaming fans.

“I'm thinking about pulling a shirt over my head and running down to the green if I hole out,” he quipped with a laugh. “That's a soccer celebration, and with my six-pack and everything, it would look perfect.”

It sure would, the man who was interested enough to see what this tournament is all about hitting the one shot that would forever make him a part of folklore ‘round these parts.

That’s just Padraig being Padraig. Most golfers with three major wins and victories all over the world and dual membership on the game’s two biggest tours aren’t looking for more work, but Harrington isn’t most golfers. He understands his role as ambassador and has a naturally curious side that is once again rearing its head this week.

“I like golf,” he said. “To be honest, if they were playing for $6 million out there on a runway out there at the airport, I'd still tee it up.”

Yes, Harrington is a different type of guy when it comes to elite pro golfers – and that’s exactly why he’s playing here this week.