Harrington says Monty would be 'mad' to captain again 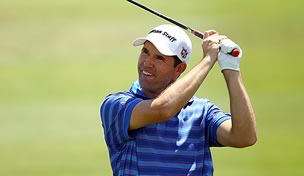 As questions continue to circle around who will captain the European Ryder Cup squad in 2014 and beyond, three-time major winner Padraig Harrington thinks that it is unlikely one former captain will reprise the role anytime soon.

'There's not a chance, after what he went through last time, that Colin (Montgomerie) would ever take the captaincy again,' the Irishman said in an interview with Reuters. 'He puts so much more on the line than anybody else - it would be madness for him.'

The presumed favorites for the 2014 captaincy have been Darren Clarke and Paul McGinley. After the United States named Tom Watson captain last month, however, Clarke commented that whoever opposes the eight-time major winner for the Europeans at Gleneagles would need a 'huge presence,' which helped Montgomerie's name to re-surface as an option to lead the team in his native Scotland.

Harrington, though, is adamant that Montgomerie will not captain again after guiding the Europeans to victory in 2010 at Celtic Manor.

'Monty's career is based on his eight Order of Merit wins and his Ryder Cup performances,' he commented. 'By taking the captaincy he's putting far more on the line than anybody else because it would be hard to mention that he's unbeaten in the singles in the competition but, oh, he's also a losing captain as well. That would take shine off his great record.'

Harrington recalled a conversation with the Scot shortly after the Europeans left Wales with the trophy three years ago.

'I had a long chat with Monty the evening we won the Ryder Cup in 2010,' he added. 'I could see the relief Colin had when we won. I don't think he quite realized until then the enormity of being captain for him.'

According to the Irishman, who narrowly missed a spot on last year's team at Medinah, the captains for the next two cycles should be McGinley and Clarke, respectively.

'My personal opinion is that McGinley should take it this time and for Clarke to do it in the U.S.,' Harrington added. 'I think Darren would be a better captain in America because of his stature over there. McGinley would be a better option to go up against Watson.'