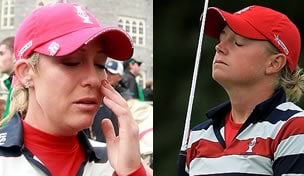 PHOENIX – The Solheim Cup’s shadow looms over the American start to the 2013 LPGA season this week in ways you wouldn’t imagine.

Though still five months away, the biennial competition shapes this season in so many ways for the Americans here.

Nobody feels it more than Stacy Lewis and Cristie Kerr.

They are Nos. 1 and 2 on the United States Solheim Cup points list, respectively, but they probably ranked first and second in frustration endured in the American loss in Ireland two seasons ago.

Lewis struggled on and off the course in her first Solheim Cup.

She was 1-3. She and playing partner Angela Stanford got routed in their first two matches, and Lewis lost a pivotal early singles match to Sophie Gustafson.

Off the course, Lewis had issues with captain Rosie Jones and some of her decisions. There were uneasy interactions between them.

Pain, ultimately, is a merciless teacher. Lewis, who grew up with scoliosis, knows this. She learned in the Solheim Cup that emotional pain is just as instructive.

In the end, Lewis turned Solheim Cup negatives into positives.

“I think if that Solheim Cup week hadn’t happened to me, I wouldn’t have won Player of the Year last year,” Lewis said. “I wouldn’t have had the year I had. I learned so much from that week.

“A lot of it was just handling the pressure and the emotions of it. I didn’t handle it well. I didn’t handle things with Rosie well. The team was on edge; we were stressed out all week. I really learned just how things off the course can affect what happens on the course.

Lewis, 28, learned lessons about managing emotions and adversity that helped her win four times last season and once already this season.

“I’m fired up to go back to the Solheim Cup,” Lewis said.

Kerr left Ireland with aches that were physical and emotional, with disappointment that fuels a motivating sense of unfinished business as she enters this Solheim Cup year.

Though Kerr claimed 2½ points for the Americans, she broke down in tears before the team’s Sunday singles collapse even began. She wept on the driving range after deciding the pain in her right wrist was too much and she couldn’t play. Kerr was in the anchor match, but she conceded the point to Karen Stupples. Kerr struggled through her first four matches with pain. To this day, she doesn’t know how she hurt herself but suspects it might have been hauling luggage on the way to Ireland.

In the end, the Americans would have retained the cup if Kerr had been able to deliver a singles victory.

“I had a photo of my teammates in my yardage book to motivate me, but, unfortunately, I just couldn’t go one more round,” Kerr said. “Words can’t really express the way I felt. I let my teammates down, my country down, my captain down. I didn’t let myself down, because I gave it all I had. I played four matches in a lot of pain.”

“It was huge for my confidence,” Kerr said of winning last fall. “Golf’s a sport where you can put in a lot of work and often not see a lot of reward. I’ve been fortunate. I’m pretty talented. I work hard, and I’ve seen a lot of success over the years. But to have a period of time where I’m doing a lot of things right, and not get a win, it was frustrating. You kind of want to lose your confidence a little bit. Winning showed me you have to persevere, that you can’t lose the faith just because you don’t win.”

Kerr will be looking to use that resolve to help the Americans win back the Solheim Cup when it is played Aug. 16-18 at Colorado Golf Club, just outside Denver.

“I definitely think we – myself and our team – have something to prove this year,” Kerr said.