Creamer dealing with loss of grandmother during Kraft 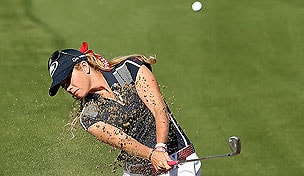 Paula Creamer’s not feeling well, not physically or emotionally, and yet she shot a 4-under-par 68 Friday to get in the hunt at the Kraft Nabisco Championship.

Creamer’s grandmother, Florence Stanton, died on Easter Sunday. Creamer said it has taken a toll on her.

“I'm definitely sick,” Creamer said. “My grandma passed away, and I'm just not sleeping, and my body kind of shut down. But last night was a rough night, but other than that, I'm feeling a little bit better.”

After opening with a 74, Creamer moved to 2-under overall on Friday.

Creamer’s maternal grandmother had Parkinson’s. Her death comes a little more than a year after she lost her paternal grandfather, Thomas Creamer, whom she called pops. She was close to both of them.

“Unfortunately, with my grandpa passing away last year, I kind of have to learn how to, in a sense, deal with loss, especially out here,” Creamer said.

Creamer said her grandmother and grandfather enjoyed watching her play.

“They have the best seats in the house now.” Creamer said. “They’re walking the fairways with me.”