Creamer gets warm-up event under her belt 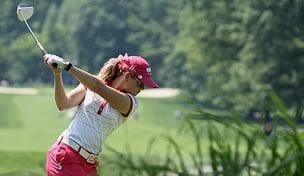 Paula Creamer won’t make her 2013 LPGA debut until the Honda Thailand event in two weeks, but she already has a victory under her belt.

Creamer played a warm-up event with the Suncoast Ladies Series developmental tour, winning Wednesday at Orange Tree Golf Club in Orlando. Creamer closed with a 7-under-par 65 to win the 54-hole event by 11 shots.

“The reason I played is I’m not going to Australia next week, and I wanted to get a scorecard in my hand and get a tournament under my belt before starting the LPGA season,” Creamer said. “It was a good golf course.”

The LPGA season begins next week at the ISPS Handa Women’s Australian Open at Royal Canberra Golf Club in Yarralumla, Australia. If you’re wondering, the Suncoast Series title came with a $2,100 winner’s check. Creamer wasn’t the only LPGA pro in the field. Hee Young Park, winner of the CME Group Titleholders two years ago, finished among the top 10.

“It’s nice to see a player of her stature in our event,” Walker said. “It’s good for the players who aren’t as established to play with her and see how they compare.”