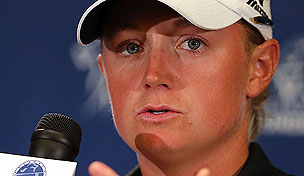 PHOENIX – With a birdie at the last, Stacy Lewis walked off the 18th green Saturday with the scoreboard showing she had narrowed Ai Miyazato’s lead to just two shots at the RR Donnelley LPGA Founders Cup.

A half hour or so later, Lewis learned she will actually be four shots back beginning the final round.

Lewis was penalized two shots for violation of Rule 13-4 after the round and before signing her scorecard. She was penalized when rules officials determined in a video review that Travis Wilson, Lewis’ caddie, tested the surface of a hazard with his right foot when he walked into a bunker off the fairway on the 16th hole.

Television viewers contacted both Golf Channel and LPGA officials questioning whether there was a violation. That led to LPGA rules officials taking Lewis and Wilson to review the video after the round.

“We looked at the video, and you have to slow it down, zoom in on his foot, he walks into the bunker, he kind of pushes, he kind of bounces his knees a little bit, and his foot turns,” Lewis said. “That was kind of the big indicators, that his foot turned, and you could kind of hear the sand crunch a little bit. So that's deemed to be testing the sand.”