As Manning knows, keeping the edge is Tiger's toughest task 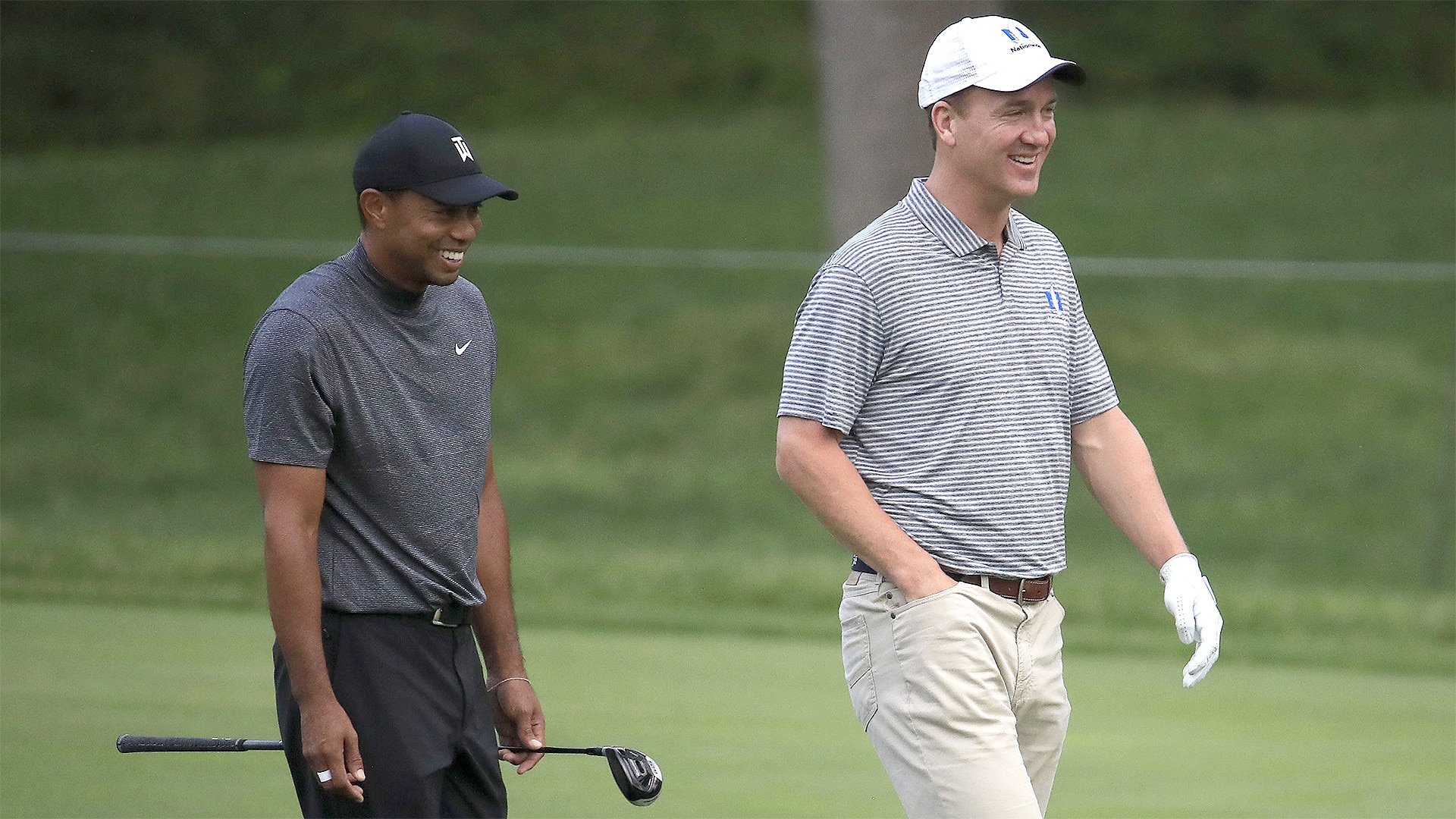 DUBLIN, Ohio – At 43 years old and having spent his share of time on the surgeon’s table, Peyton Manning took particular interest in his playing partner’s performance on Wednesday at Muirfield Village.

The former signal caller took his annual place alongside Tiger Woods during the Memorial pro-am, a rite that’s become more enjoyable as Manning’s game has proportionally improved as he sails deeper into retirement. While he clearly has no interest in suiting back up and heading to OTAs, he certainly had to marvel at his medical miracle of a sidekick.

“The most impressive thing is how he’s been able to adjust and be adaptive to playing in a new physical state,” said Manning, who like Woods returned from fusion surgery on his neck to win a Super Bowl and conclude a Hall of Fame career. “To use a baseball analogy, I couldn’t throw the 100 mph fast ball anymore but I could still work the outside edges of the plate. You can strike a guy out that way and he struck a lot of guys out down there at Augusta.”

For an athlete like Manning, Woods’ return from the depths of injury is the ultimate silver lining. Overcoming physical barriers to reestablish competitive relevance brings a level of appreciation that transcends the understanding of a casual observer.

And with that unique sense of awe is also a singular awareness of the toll these types of comebacks can take. It’s an understanding, for example, of not only how demanding it was for Woods to end a decade-long major victory drought at Augusta National but also how much more difficult it now is to maintain that edge.

When Woods teed off for the first round of the PGA Championship two weeks ago, the unrealistic expectations were expected. What wasn’t anticipated were rounds of 72-73 and an unscheduled trip back to South Florida following a missed cut.

Perhaps it shouldn’t have been much of a surprise. The emotional plateau that Woods achieved at the Masters was always going to be difficult to follow, and a curiously limited schedule to prepare for the year’s second major didn’t help things.

He skipped the Wells Fargo Championship, which had traditionally been his first start following the Masters. He wasn’t ready. Woods’ preparation was also limited at Bethpage Black, where he played just nine practice holes before being sidelined on Wednesday by illness.

“It took me a little bit,” said Woods when asked how long it took him to recover from the Masters. “I lost quite a bit of weight and wasn’t feeling my best but I was able to put most of it back on. Just continue working at it.”

By all accounts that won’t be the case for next month’s U.S. Open. Woods arrived at Muirfield Village looking refreshed and ready following a scouting trip last week to Pebble Beach. There was a twilight range session on Tuesday followed by Wednesday’s pro-am.

“I feel a lot better. I just need to play a little bit more now. Hopefully it will be four solid days heading into the U.S. Open,” Woods said.

Woods’ resume at Muirfield Village, which includes five victories at Jack’s Place, hasn’t necessarily translated to success at the U.S. Open. He’s won the U.S. Open just once (2000) following a victory at the Memorial, but Muirfield Village has always served as a timely tune-up for the national championship.

For those who believe that’s somehow disrespectful to Jack Nicklaus, the event’s host, know that this is the man who set the standard for peaking at major championships. Nicklaus understands the big picture better than anyone else.

“I would consider him the favorite, he won by 15 shots when he played there,” Nicklaus said of Woods’ chances at the U.S. Open. “Sure. Absolutely. He loves it, absolutely he should be the favorite.”

But if Woods’ history at Pebble Beach, where he lapped the field at the 2000 U.S. Open by 15 shots, is a reason to be optimistic about his chances, it’s his current circumstance that should make him the undisputed favorite.

Unlike the PGA Championship, where he still seemed adrift in his post-Masters honeymoon, Woods now appears to be on a more familiar path to the U.S. Open.

It was always easy to believe that Woods arrived at major championships in his prime and was magically transformed into an unbeatable force, but the truth is it was his unparalleled preparation that at least partially fueled his belief that the title, any title, was his for the taking.

In a way the last six weeks since his victory at Augusta National have shown the world what exceptional athletes like Manning already know. Climbing out of the void of injury is difficult but maintaining that edge and level of preparation is just as demanding.