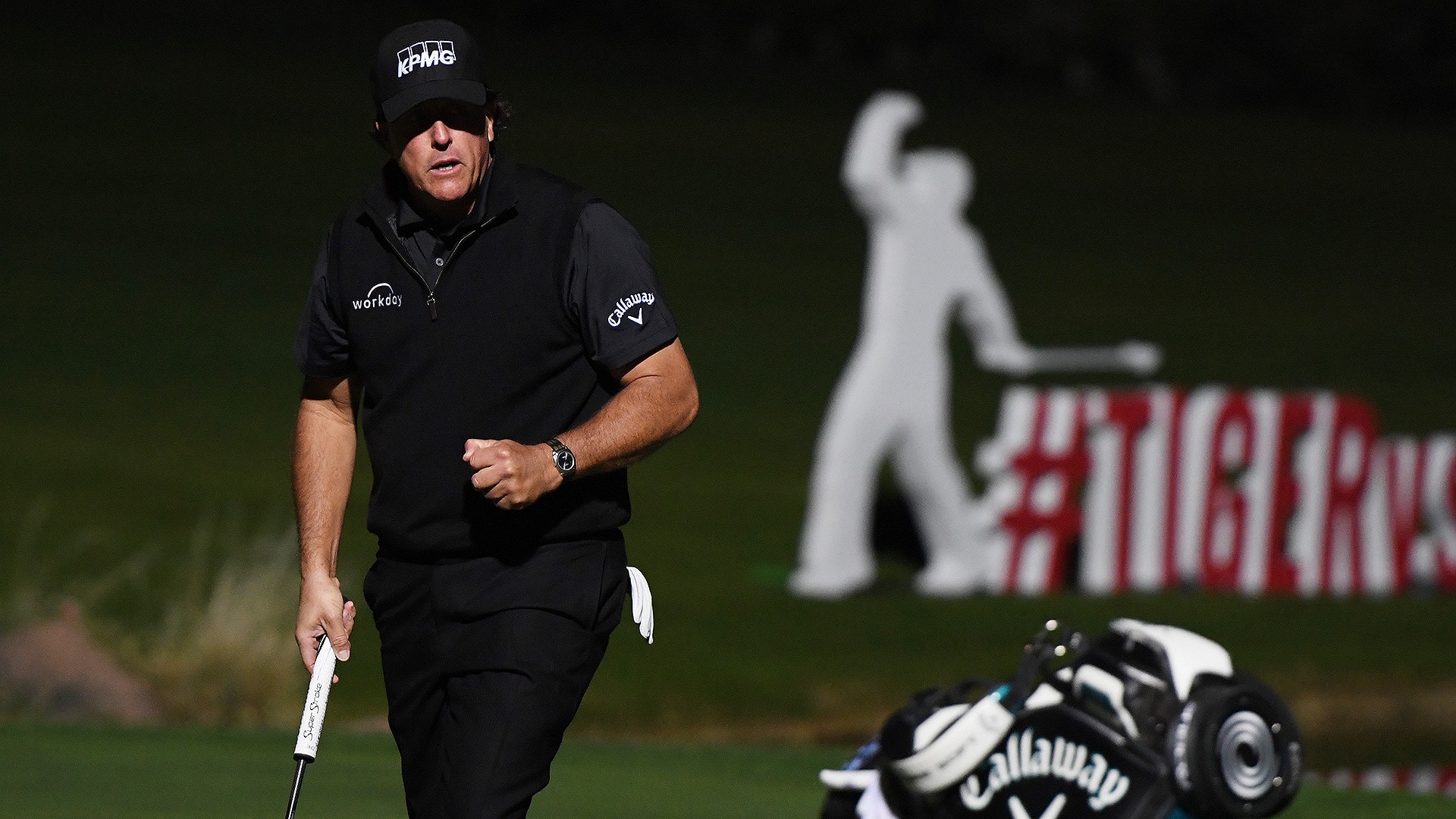 Ninety-three yards for $9 million. That’s how The Match was determined.

Phil Mickelson, on the 22nd hole of the event, under the greenside spotlights, made birdie from 4 feet to defeat Tiger Woods and capture the winner-take-all prize.

“To be able to have just a little bit of smack talk for the coming years means a lot to me,” Mickelson said.

“My heart can’t take much more.”

It put a merciful end to a match that didn’t mirror the way these two have performed throughout their respective Hall of Fame careers.

After playing 18 holes evenly at Shadow Creek in Las Vegas, Woods had an 8-foot putt on the 19th hole to win. He missed.

Mickelson had a 20-footer to win on the 20th hole. He missed.

Mickelson had an 8-footer to win on the 21st hole. He missed.

Woods had a 10-footer for birdie on the 22nd hole to put pressure on Mickelson. He missed.

Mickelson had 4 feet for birdie on the 22nd hole. He made it.

And with that, Mickelson collected every penny of the $9 million purse.

The Match was billed as the ultimate one-one-one competition between the two greatest players of their generation. But the first nine holes were defined more so by awkward interaction between the two; television announcers talking over conversations; and a lack of side bets, lack of trash talking and lack of birdies.

Mickelson won the second hole when Woods surprisingly missed a 3-foot par putt. While walking along the third hole, Mickelson said to his caddie [brother Tim]: “I was a half a second away from giving him that. I’ve never seen him miss one of those.”

The match stayed in Mickelson’s favor until Woods won the par-5 seventh with a birdie, but Phil responded by winning the par-3 eighth with a par.

It wasn’t until the back nine when the action – and intensity – began to heat up, by comparison. 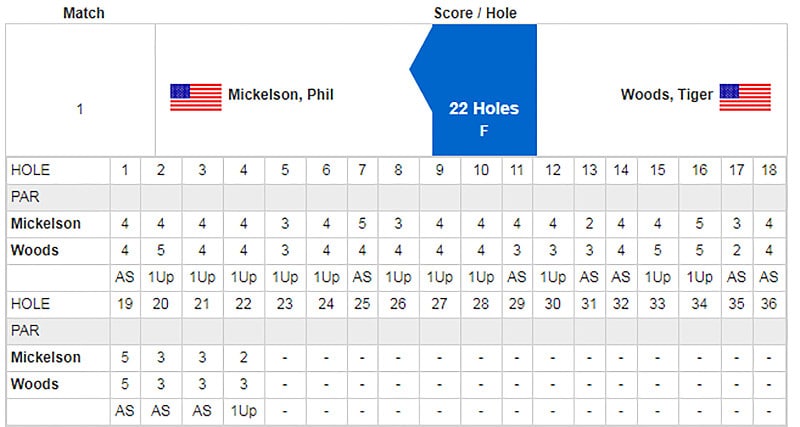 Woods birdied Nos. 11 and 12 to take his first lead of the day, 1 up. Mickelson then responded with a birdie on par-3 12th. After Woods hit his tee shot to 16 feet, Mickelson stuck his to 9 feet and then converted the birdie.

Woods had a chance to reclaim the advantage at the par-4 14th, but his 10-foot birdie effort eased by the right edge.

“I think I willed that out,” said Mickelson.

With four holes to play and the match all square, both players hit the fairway at the par-4 15th. Walking alongside one another, Mickelson said, “I’m trying to be more talkative, but I’m just not this back nine.” Replied Woods, “I understand. We got back into our old mode trying to beat each other’s brains in.”

The beats, however, didn’t come though exceptional play.

Both players missed the green at the 15th. Woods chipped 6 feet past, while Mickelson chipped to gimme range. Woods missed his par putt and Mickelson reclaimed a 1-up lead.

Following a pair of pars at the par-5 16th, Mickelson hit the green at the par-3 17th and Woods’ tee shot ran through. But Woods chipped in – the first and only real highlight of the day – and Mickelson missed his birdie putt from 15 feet.

All square with one hole to play for $9 million, Woods faced a 5-footer for birdie at the 18th while Mickelson had 3 feet. Woods made his and conceded Mickelson’s.

They were able to play one proper hole in sudden death before moving to the makeshift scene at 18, which they played three times before determining a winner.

The two players also did side bets periodically throughout the match. Here’s a look at how those played out, with money won going to the charity of choice for Mickelson and Woods.

*Par-4, No. 9: $1 million for an eagle. After Woods hit the fairway and Mickelson just missed it, they added an extra zero to their initial $100,000 bet to hole out. Woods blew his approach shot nearly over the green, while Mickelson hit his into the front bunker.

*Par-4, No. 14: $100,000 for longest drive. Mickelson hit his tee shot into the right fairway bunker. Woods’ tee shot was in the same direction and landed in the rough. No one won, since neither hit the fairway. That was the final side bet. Final tally: Woods, $200K; Mickelson, $600K

When Tiger Woods tees it up for The Match, he'll switch his ball from a Bridgestone Tour B XS to a Tour B X.