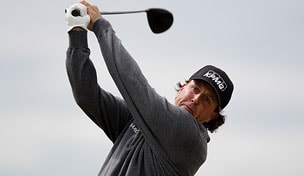 After failing to break par in eight consecutive tournament rounds, Phil Mickelson is 15 under par in his last 36 holes.

Mickelson followed up his second-round 64 in the Scottish Open with a 65 in the third round at Castle Stuart. At 14 under through three rounds, Mickelson trails Francesco Molinari by three shots.

The decision to enter the tournament on a sponsor's invitation at the last minute has paid dividends for his confidence.

'I'm very happy that I made the decision to play here at the Scottish, and hopefully I'll have a good round tomorrow that will give me some momentum heading into next week as well,' he said.

Mickelson made eight birdies on Saturday, dropping just one stroke at the par-3 eighth hole. He rallied with six birdies for a back-nine 30 to jump into a tie for fifth place.

The lefty was 11 back of Molinari after Day 1. To catch the Italian in the final round, however, Mickelson hopes for tougher scoring conditions than what the field has exploited to this point.

'I think for us to catch the leaders, the guys that are trailing and trying to make a move tomorrow, I think we need a little bit of weather to move up the board,' he said.

Win or lose on Sunday, Mickelson is happy with the timing of putting together two encouraging rounds.

'It is (good timing), because the last couple of months, I have not played the way I would like,' he said, 'but I knew that it wasn't that far off and that it wasn't far away from turning.' 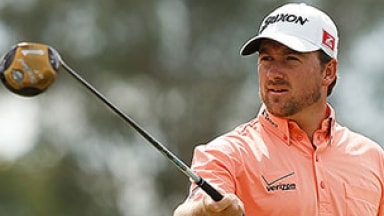 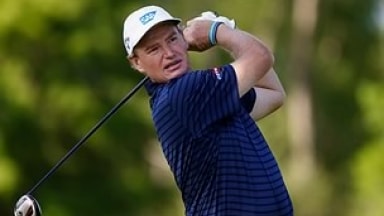