Mickelson: Practice round with Rice was fun 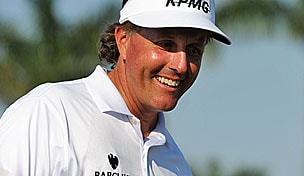 AUGUSTA, Ga. – One of Augusta National’s newest members joined a familiar face for a round on the storied layout on Sunday.

Former U.S. Secretary of State Condoleezza Rice, who along with Darla Moore became the first female members at the home of the Masters last year, joined three-time champion Phil Mickelson for a casual round.

“She's one of my favorite people. She's got the greatest personality and attitude, and she's so much fun to be around,” Mickelson told reporters after the round. “She's so knowledgeable about world affairs. It's just incredible. It's a great experience. . . . As soon as I saw she was a member, I called her to work up a game.”

Rice, a 17 handicap, hit the fairway with her opening drive and capped her round with a 40-foot par putt (net birdie) at the last.

“She’s a phenomenal putter,” said Mickelson, who also played with his manager Steve Loy and another club member on Sunday.

After the round Rice donned her green jacket and mingled on the practice tee talking to players.

“She kept asking about the course, and I kept asking her about countries,” Mickelson said. “It was really fun.”