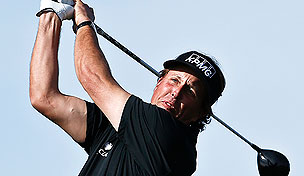 SCOTTSDALE, Ariz. – For a noted tinkerer like Phil Mickelson, putting a new club in the bag isn’t such a big deal. Seeing an immediate impact is, though.

On Tuesday, Mickelson started testing Callaway’s RAZR Fit Xtreme driver on the TPC-Scottsdale driving range and liked it so much that he decided to add it to his arsenal right away.

“Here's the difference: I spin the ball a lot with my irons, and when I go to a driver that has enough loft, it spins too much for me so I have to deloft it, which you see me create this tilt in my golf swing to get the ball up in the air,” he explained. “This driver spins so low that I can have more loft on the club, making it easier to hit.

“This has got to be good for every player, I would think, but it sure as heck is good for me. And by having it be a low spin driver with enough loft, and because it's that RAZR Fit Xtreme where you can fit it, I was able to get it dialed in to where it goes straight. But I'm able to make the same golf swing as my irons so you'll see me extend down the target line, you won't see this kind of tilt because it's not enough loft to get up and it's not low enough spin to not float, and it really could be a revolutionary club for me. Possibly all golfers, but certainly for my game. If I can drive it like I did and with the ease with which I did and the misses be where they were, then this could be a really big deal for me.”

In posting an opening-round 11-under 60, Mickelson hit 8-of-14 fairways and averaged 300.6 yards off the tee. Afterward, he gushed about the new club.