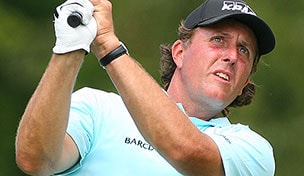 Phil Mickelson has spent an entire career as the people's champion. He's followed major championship heartbreak by signing autographs until the last fan left happy. He's hugged all the grandmothers and kissed all the babies. He has a connection to those outside the gallery ropes like no professional golfer since Arnold Palmer.

You could say his last two decades have been a study in how to win friends and influence people.

All of which makes his most recent proclamation so quizzical.

Following his final round at the Humana Challenge on Sunday, Mickelson said he will need to make “drastic changes” going forward. Now, it’s still unclear what these drastic changes could entail – they could be anything from limiting his playing schedule to simply moving to another state – but the cause of them is clear.

More on Mickelson and Proposition 30

It’s all in reaction to Proposition 30, passed by the state of California last November, which significantly impacts those who have a taxable annual income of more than $1 million.

“I happen to be in that zone that has been targeted both federally and by the state and, you know, it doesn't work for me right now,” Mickelson said after finishing in a share of 37th place. “So I'm going to have to make some changes.”

Again, there’s no telling yet what these changes might be, though Mickelson alluded to the fact that he would allow more insight prior to this week’s Farmers Insurance Open at Torrey Pines.

Maybe it’s reading too much into his comments, but if this decision includes playing less golf, it would go against so much of what Mickelson has tried to stand for during his career.

This is a man who despite ranking second in PGA Tour career earnings has always found a connection with Joe Fan – and with whom Joe Fan has always felt a connection. Limiting his playing schedule due to injury or wanting to spend more time with family – as Steve Stricker will do this year – wouldn’t repel those fans.

“If you add up all the federal and you look at the disability and the unemployment and the Social Security and the state, my tax rate's 62, 63 percent,” he explained. “So I've got to make some decisions on what I'm going to do.”

Obviously, that 62-63 percent tax rate is monumental and one that can seriously affect Mickelson’s personal life. According to Forbes magazine, he made a combined $47.8 million last year in both on- and off-course earnings. Do the math and that’s a significant chunk of change that he stands to give up due to Prop 30.

If Mickelson is guilty of anything so far, it’s using his inside voice while the microphones were on. This topic has apparently been weighing on his mind for a while, but when it was broached Sunday he spoke about it only coyly, deflecting his decision for later this week at Torrey Pines.

What does that mean, exactly? We’ll likely find out more in coming days. If it’s simply a matter of Mickelson moving his family from California to avoid the tax code but doesn’t affect his professional schedule, well, the impact won’t be felt much beyond his own household. If it means, though, that he will only compete in a limited number of tournaments or won’t play certain events in California, it will have a much bigger effect on how he’s viewed publicly.

There’s no doubt Prop 30 will have an effect on the bottom line of his bank statement. Addressing it privately will ensure his status remains intact. Letting the new tax rate lead to “drastic changes” in his career, though, could directly impact how Mickelson is viewed by the legions of fans who have revered him for so long.