Phil Mickelson compared his handling of his tax situation in California to the 2006 U.S. Open, where he blew a one-shot lead on the 72nd hole at Winged Foot.

“I think I’m going to learn my lesson and take a wedge and get it back in play,” he said with a smile Wednesday at Torrey Pines. “I made a big mistake talking about this stuff publicly, and I shouldn’t have done that.”

For Mickelson, Wednesday’s news conference was merely the latest headline in a week filled with them. On Sunday, following the final round of the Humana Challenge, he said he would need to make “drastic changes” in his life following federal and California state tax increases.

Two days later, Mickelson released a statement through his spokesman T.R. Reinman, saying he should have kept his opinions on his financial situation private and apologized to anyone he may have offended.

He apologized again Wednesday, saying, “I think it was insensitive to talk about this to people who are not able to find a job or are living paycheck to paycheck.”

Mickelson, 42, who lives in Rancho Santa Fe, said he’s being taxed at a “62 to 63 percent” rate, though business insiders have noted that the actual figure is closer to 50 percent.

Nonetheless, his recent comments have fueled speculation that he could move out of the state, perhaps to Arizona. Mickelson reiterated Wednesday that he hasn’t made a decision regarding his future.

“I shouldn’t take advantage of the forum that I have as a professional golfer to try to ignite change over these issues,” he said. “I shouldn’t have talked about because I don’t have a plan formulated yet on what I’m going to do.”

Mickelson said that he’s not concerned that the tax talk will continue to be a distraction this week. A three-time winner at the Farmers Insurance Open, he is coming off a T-37 at the Humana Challenge, where he shot 17 under par over the final three rounds.

“I’ve made some dumb, dumb mistakes,” Mickelson said, “and obviously talking about this stuff was one of them.” 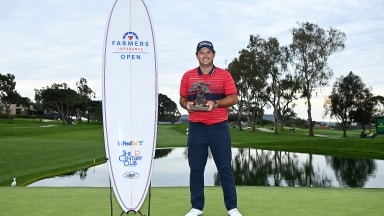