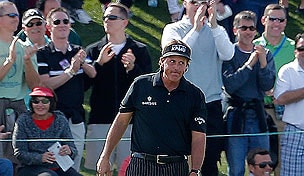 Forget taxes. On Thursday at the Waste Management Phoenix Open, Phil Mickelson zeroed in on a more famous number: 59.

Fittingly at one of the most raucous venues of the year, Mickelson sent the golf world into a tizzy by flirting with golf’s magic number, but his birdie putt on his final hole cruelly lipped out. He settled for an 11-under 60 and the first-round lead.

“I’m ecstatic to shoot 60. I’m excited and so forth,” he said afterward. “But you don’t get chances to shoot 59 very often. To have that putt on-line, I’m kind of mortified that that didn’t go in.”

Mickelson was coming off pedestrian finishes at both the Humana Challenge and Farmers Insurance Open, but you wouldn’t know it watching his first round at the par-71 TPC Scottsdale.

Starting on the back nine, Mickelson birdied his first four holes, made par on Nos. 14 and 15 (a par 5), and went birdie-birdie-birdie to go out in 7-under 29. (Worth noting: He has won five of the seven times that he has shot 29 or better for nine holes.)

Mickelson started his back side – the front at TPC Scottsdale – with a birdie. He also birdied Nos. 3, 4 and 7.

Needing to birdie one of the last two holes to shoot 59 – or go birdie-birdie to become the first player to shoot 58 in a PGA Tour event – Mickelson hit his approach on No. 8 to 18 feet, then left his birdie putt a few rotations short.

At the 470-yard ninth – the second-toughest hole on the course – Mickelson split the fairway, then from 141 yards came up about 25 feet short of the flag.

His birdie putt looked like it would slide in on the right side, and Mickelson chased after the putt, his putter raised, believing he had made it. And the ball horseshoed out.

Mickelson grabbed the back of his head with his left hand. His caddie, Jim Mackay, collapsed on the green. His fellow playing competitors, Jason Dufner and Rickie Fowler, looked away in disbelief.

Thisclose to becoming the sixth player to shoot 59 on the PGA Tour.

“That one is tough to take,” Mickelson said. “You just don’t get those chances very often.”

Mickelson’s season had gotten off to a turbulent start. He tied for 37th at PGA West, but made headlines for complaining about the tax rate in California. After apologizing for those remarks at his hometown tournament, he never shot better than 70 at Torrey Pines and tied for 51st.

Earlier this week, he put the new Callaway Razr Fit Xtreme driver in his bag and noticed an immediate difference.

“Today I drove it phenomenal and feel really good about it,” he said. “That club made the biggest difference.”

The PGA Tour is set to reveal the remaining tournaments that will receive elevated status next season.