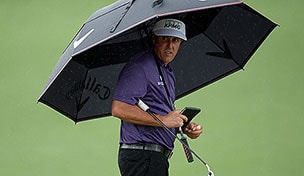 AUGUSTA, Ga. – Phil Mickelson said Thursday that he gave Augusta National too much respect during the first round, that he played position golf on a day where he should’ve been much more aggressive.

Mickelson vowed that Friday’s second round would be different.

It was, but for the wrong reasons. Mickelson followed a 71 with a lackluster 76 at Augusta and will have to make a huge run this weekend to contend for his fourth green jacket.

The performance was another one typical of a rollercoaster Mickelson, including three birdies, five bogeys and a double bogey on No. 12 when he dunked his tee shot into the water.

Mickelson shot 40 on the back nine.

Everyone knows that Mickelson can go low in a hurry. This time it may be a tough ask because so many top players like Tiger Woods, Rory McIlroy, Adam Scott and Justin Rose, among others are all ahead of him.

“You’re never out of this tournament,” Mickelson said. “You just never know what’s going to happen.”

Sums up Mickelson perfectly, doesn’t it?