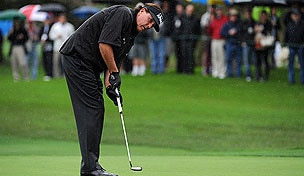 SAN DIEGO – Phil Mickelson stumbled into the weekend at the Farmers Insurance Open.

Despite making bogeys at the 17th and 18th holes on the South Course on Friday at Torrey Pines, Mickelson survived the cut, making it on the number. He shot 71 in the rain to finish at 1-under 143.

“The cut was the last thing on my mind,” said Mickelson, who had trouble keeping his hands dry despite wearing gloves on both hands at the end of his round. “I was trying to make one or two birdies to get within striking distance, if I shot a low round tomorrow.”

Mickelson has a busy stretch to get his game right. After this week, he plans to play the next three weeks – Waste Management Phoenix Open, AT&T Pebble Beach National Pro-Am and Northern Trust Open. That will add up to five consecutive events. Mickelson tied for 37th at the Humana Challenge last weekend.

“I want to see if I can get it turned around and get it going,” Mickelson said.