Mickelson to unleash Phrankenwood at Augusta 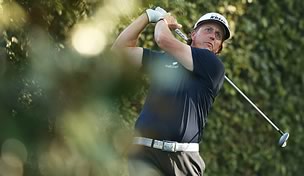 AUGUSTA, Ga. – The man who has played a Masters with two drivers in his bag and a U.S. Open without a driver in his bag will tee off on Thursday at Augusta National with something in between.

Phil Mickelson’s club has been dubbed “Phrankenwood” and features 8.5 degrees of loft on a fairway-wood chassis with a driver face. To put it another way, the club is effectively a 2-wood.

“I asked the engineers (at Callaway) to take that (X Hot 3Deep fairway wood) technology and just put it on steroids,” Mickelson said. “I wanted to make it more like a driver.”

The club, which features a 45-inch shaft, allows Lefty to work the ball easier and control his trajectory with a high-launch, low- spin footprint. It’s also easier to control, not surprising given the fact that Mickelson’s normal driver has a 46-inch shaft and, before this year, very low loft.

“It comes off fast, as well as with low spin and it’s running which is exactly what I wanted here,” Mickelson said.

Mickelson said the Phrankenwood will replace his normal driver. As for his other equipment tinkering, Dave Stockton Sr., his putting coach, told Golf Channel on Monday that Lefty plans to use an oversized grip with a traditional hand grip this week.