Mickelson wants consistent rules on anchoring, doesn't pick a side 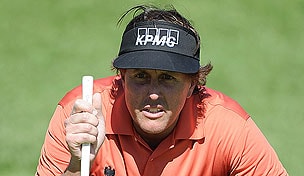 Mickelson doesn’t like the idea of the PGA Tour making its own rules.

“I remember a conversation I had years ago with the commissioner about this. It made perfect sense to me. We have such varying views on things that to try to make rules internally that would be favoring some and not others is the wrong way to go about it. We need to have an independent organization, in this case, the USGA and R&A as our governing bodies. We should not interfere.”

“I have very mixed feelings on this,” Mickelson said. “Although I feel anchoring should not be part of a golf stroke, it was allowed 30-some odd years ago and should not be taken away . . . I feel it’s unfair to players that have been putting that way for quite some time with the understanding that it was legal.”