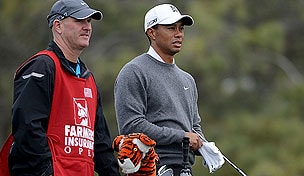 SAN DIEGO – As the PGA Tour heads for its second weekday finish of the 2013 season at the Farmers Insurance Open, the question appears not to be whether Tiger Woods will win – but rather, by how much.

With play suspended at 4:57 p.m. PT due to darkness, tournament officials announced that play will resume at 11:10 a.m. PT Monday, with each of the 87 players still facing at least three holes to complete.

That includes Tiger Woods, who got in 25 holes today alongside Billy Horschel and Casey Wittenberg, and saw his lead balloon from three shots to six in the process. After a third-round 69, Woods played the first seven holes of his final round in 3 under before darkness fell at Torrey Pines. His group will resume play on the par-3 eighth hole, with Woods leading by six shots over both Nick Watney and defending champion Brandt Snedeker.

When play resumes, coverage will air live on Golf Channel beginning at 1:30 p.m. ET and will continue until 4 p.m. ET, at which point CBS will air the event until a winner is crowned.