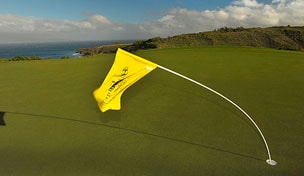 KAPALUA, Hawaii – Call it a case of déjà blew.

For the second time this week, players have been pulled off The Plantation Course at Kapalua and scores have been wiped out because of extreme winds and gusts up to 50 mph.

'You hope for the best and it just didn't happen,' vice president of rules and competition for the PGA Tour Slugger White said.

Exactly 71 minutes later, officials blew the horn and suspended the first round of the Hyundai Tournament of Champions ... again. One hour later, the verdict was the same as it had been Friday – scores were deemed and void and play would restart Monday.

Jason Dufner was the only man under par when the horn blew (1 under through five holes). On the other end of the spectrum, Ben Curtis was 5 over through two holes and in last place. Four players had yet to tee off.

'It seems like the first day was a cake walk compared to today,' Webb Simpson said.

Tour officials maintain that they will try to play 54 holes – 36 on Monday and 18 on Tuesday.

'Our meteorologist is saying 25-30 mile an hour winds (for Tuesday) which we can play in,' Pazder said. 'It's the gusts that creep up above 40 that have knocked us out.'

In one of the more telling examples of how extreme the winds were, it took Matt Kuchar seven minutes to hit his tee ball on his first hole, No. 10.

'Time to go and teed the ball up,' Kuchar said. 'I think I was ready to hit it and a gust of wind came and I backed off. Went back to address the ball and another gust of wind. The second gust blew the golf ball off the tee and rolled probably 4 or 5 feet back from the tee.'

At that point, Kuchar called a rules official over to discuss the conditions. They chatted for several minutes before Kuchar eventually teed his ball up again, hit it, and found the 10th fairway.

'I'm not sure if that was the point to show that we're making every effort to play, so it's not a case where we are kind of thinking it's too difficult to play. We are out there making all efforts and it really is too windy, unfortunately, to play,' Kuchar said.